Yesterday, December 29, was the feastday of Thomas Becket, Archbishop of Canterbury, who was killed in 1170 when four knights entered the cathedral and slew him. This transgression caused an uproar throughout Christendom and only three years later Thomas was canonised by Pope Alexander III. The cult of Thomas Becket grew rapidly in popularity and soon eclipsed other cults, including that of St Edward the Confessor, who had been canonised only twelve years earlier in 1161 by the same pope. The trajectories of these two cults make for an interesting comparison because their origins are close to each other in space and time, but also because of the many differences between them. In this blogpost I aim to look at a few of these differences. The images are all taken from the British Library online catalogue.

The two cults came about within the reign of the same pope, Alexander III (1159-81). By the time of Edward the Confessor's canonisation (1161), there was a papal schism which divided Latin Christendom between Alexander and his rival, antipope Victor IV, and each of the contestans vied for the loyalty of Europe's secular princes. It was then the English clergy and King Henry II decided to re-apply for the canonisation of Edward the Confessor (an attempt of 1138 had fallen through on grounds of insufficient ecclesiastical support), and the request was granted. This was possibly due to Henry II's support of Alexander, but it may also have been because the English clergy was now united behind this claim and thus provided the support that had been lacking in 1138.

Edward the Confessor (d. 1066) provided Henry II with a sainted forebear that could legitimise his own rule, which was still a matter of contention in the 1160s. However, there is nothing to suggest that Henry expressed any personal devotion to Edward, he was more interested in the political aspect of the saint - this claim is supported by the enthusiasm Henry dedicated to the genesis of Wace's Roman de Rou. In ecclesiastical circles, however, Edward did not achieve any wide popularity, and it was primarily at Westminster - where the king lay buried - that any significant devotion could be found. This can be seen clearly by the fact that Archbishop Thomas Becket himself applied to Pope Alexander at the Council of Tours in May 1163 for the canonisation of his predecessor Anselm (1109) - quite possibly to counter the English monarchy's brand new saint. Although Pope Alexander expressed sympathy for the cause and allowed veneration, he refused to canonise the famous archbishop and theologian. Becket's petition is suggestive of the growing hostility between him and the king, an hostility that was to reach new heights at the council of Westminster in October that year. Edward's lack of wide ecclesiastical support can also be seen in the fact that at Edward's translation, October 13 1163, only the archdiocese of Canterbury was represented, not the archdiocese of York.

At the time of Thomas Becket's canonisation the papal schism was still ongoing, but the murder of an English archbishop within the confines of a cathedral enraged both lay and cleric, and both Becket's ecclesiastical supporters (many of whom were French clerics who had entertained him during his exile in the period 1164-65) and the lay populace expressed their horror. In 1173 Pope Alexander canonised Becket (without much ado, as had been the case with the Confessor) and the following year Henry II performed a public penance for his role in the murder. Henry was also forced to make certain concessions to the pope regarding royal interference in ecclesiastical matters, which had been one of Becket's major causes. Through his martyrdom, in other words, Thomas Becket provided the English church with exactly the kind of saintly figurehead he had sought in Anselm seven years prior to his death. However, although Becket remained popular even after the immediate surge of piety had lost its momentum, he did not alter significantly much with regards to the relationship between Church and Monarchy, and the most significant long-term beneficial consequences are probably the boost in the revenue of Christ Church at Canterbury, which hosted his shrine. Nonetheless, the cult enjoyed an impressive longevity.

Another interesting difference between Thomas Becket and Edward the Confessor is the development of their respective textual traditions. Edward the Confessor had been dead for nearly a century by the time he was canonised, and because of his position as the last - or penultimate, depending on your views - Anglo-Saxon king he was immediately revered by the Normans in a successful attempt to legitimise their new reign. It was the childless Confessor who had appointed William, Duke of Normandy, as his successor - or at least that was what the Norman historian William of Jumièges claimed already in the 1060s and -70s. Following Edward's death, therefore, he made important appearances in historiographical works of various kinds, the most significant of which being Vita Edwardi qui apud Westmonasteriam recquiescit, a biography written to secure his widow Edith's position at the new Norman court. This work was the chief source for Osbert of Clare, prior at Westminster who attempted to have Edward canonised in 1138 and who wrote the first Edward hagiography to support his petition. Although initially unsuccessful, this was the basis for Aelred of Rievaulx's hagiography of 1163, written for Edward's translation. In other words, at the time of Edward's canonisation there was a rich textual tradition to glean from for the liturgical material - the earliest of which came about sometime in the period 1161-66 - and later histories and hagiographies.

For Thomas Becket things were vastly different. Between his death and his canonisation there were three years and consequently no tradition to build from. However, the sensational character of his death - and the fact that there were clerical eye-witnesses who could disseminate their knowledge firsthand - resulted in an impressively swift production of purely hagiographical material, which did not spring from any preceding historiographical tradition. The earliest text was the Vita sancti Thomae (first recension c.1171-72) of Edward Grim, the man who had attempted to shield Becket with his arm and nearly lost it as a result. This text was the foundation of a metrical French life authored by Guernes de Pont-Ste-Maxence in 1172-74 and was also used by William Fitz Stephen in the second recension of his Vita sancti Thomae. In addition there was a Passio beati Thomae in dissemination from the 12th century onwards. These texts were in turn the foundation for the office for Thomas Becket, which came about very quickly following his canonisation. 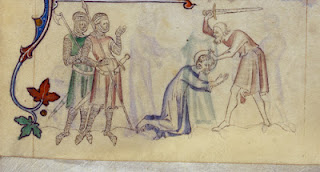 The most significant differences between Thomas Becket and Edward, however, are typological, and this may in turn account for the different degrees of successfulness the two saints could claim. Edward was, as his sobriquet tells us, hallowed for his virtuous life, his virginity, his peaceful reign, his mild-mannered behaviour and his ability to heal the lame, the blind and - in one memorable instance - the scrofulous. However, despite his commendable deeds, he was still a rather tame saint and he paled in comparison to the virgin martyrs who had given their life for Christ, facing an often excessively brutal end, or in comparison to the apostolic martyrs who had died gruesomely by the hands of heathens in their attempts to spread the Gospel. He was also a rather tame king, for although his reign was of a relative peace, it was rather boring compared to the mighty men-of-arms like Charlemagne or Stephen of Hungary. In other words, Edward fell short in two categories, and this can be seen by the rivalry he met from the cult of a man who was listed both as a martyr, a king and - if I remember correctly - a virgin, namely Edmund the Martyr, 9th-century king of East Anglia. This is not to say that the virtues and iconography of Edward rendered him completely impotent as a saint, far from it, but as a humble and chaste king who - reportedly - submitted to the superiority of the Church, he was more attractive to ecclesiasticals, who found in him the perfect model of a Christian king - this was especially the case in the Cistercian climate of the 12th century - and who occasionally portrayed him resembling a bishop rather than a king.

Thomas Becket, however, was a different saint type, the martyr. As André Vauchez has pointed out the brutal death of a contemporary will often result in a surge of enthused piety from the populace, and this was indeed the case with Thomas Becket. His social position, his steadfastness in a brutal martyrdom and his network of supporters on the continent helped to rapidly disseminate his cult, and although the Confessor had enjoyed a certain popularity beyond England, it was little compared to that of the martyred archbishop. Furthermore, the hagiographers of Thomas were indignantly opposed to the king and framed the saint's characerisation in a manner that could appeal to all Christians, and that also gave a certain edge to the Church. Thomas Becket was portrayed as a new man, a reformed sinner who had transformed himself upon taking his office as archbishop in a manner reminiscent of Paul's letter to the Ephesians. He was furthermore described as a good shepherd, a christic image which appealed to the laity who thus considered him a patron willing to aid them in their plights, and also to the clergy who saw him as a stout defender of the Church. Last, but far from least, he was of course a miracle-worker, which was mandatory for any saint, and which is what attracts a large following among both lay and learned. It is in these miraculous cures, however, that we find one of the most interesting differences between Thomas and Edward, and we can imagine that this had severe ramification for Edward's standing - although this particular link has not been conclusively proved.

As a miracle-worker Edward the Confessor had been described in very christic terms: he, both while still alive and when dead, healed the blind and the lame in the same way that Christ had done, and this christomimesis was evidence of his virtuous life. Thomas Becket, however, showed his virtue posthumously, but his catalogue of cures and helps exceeded the repertoire of Edward and included feeding the hungry and healing a long list of diseases and ailings. In an age when medicine was largely painful and ineffectual, and when a plethora of illnesses were very common, this was a major point of attraction for the pious laity. 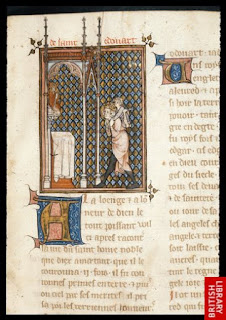 To sum up, then, the cults of Thomas Becket and Edward the Confessor co-existed throughout the High Middle Ages and make for an interesting comparison. I have here focussed on the differences, but the matter is so complex and requires a book-length study of its own in order to satisfy the attention demanded by the material. They were typologically very different and their propagators approached the mandatory christomimesis in different ways. Ultimately, however, Thomas Becket proved most successful in that regard, as he had died an actual martyr's death, while the first biographer of Edward the Confessor could only vaguely suggest a Christlike end.