A Vision of Mammon on Black Friday

The most intransigent spam messages in today's inbox have told me that today is Black Friday. I normally don't proselytise on this blog, but I make an exception for some issues and I will make an exception this time. As a farm-boy from a small rural village of Western Norway it is hard to identify and to comprehend some of the workings and going-ons of higher capitalism, but now as a PhD candidate I find it more and more difficult not to get inundated by the sundry pernicious stratagems that businesses concoct to attract more buyers and to accelerate consumerism. To me there is something deeply disturbing and immoral about this type of extreme capitalist-induced consumerism, used as I am from childhood that things should last and if they broke they could be repaired.

As a medievalist familiar with the Bible and biblical language, it is difficult not to wax slightly gloomy and launch into Jeremiads on the subject. The Bible contains many poignant words on the subject, but in this instance I leave the words to the Caribbean poet Kendel Hippolyte, born in Saint Lucia, who wrote an evocative poem called Mammon in his poetry collection Birthright (Peepal Tree 1997). 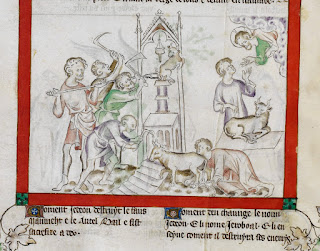 The destruction of Baal's altar, and Gideon's sacrifice
BL MS Royal 2 B VII, psalter, England, between 1310 and 1320
Courtesy of British Library


Mammon
ghost, guardian-spirit of banks, trans-national Corporations,
daylight deals in air-conditioned sewers
ghoul, eating the flesh of our dead childhood
ghost, effluvium of the rotting innocence in the skull-vault
ghost, smoke-screen between my self and your self
whose language is a hissing yes to vice
who salivates hypocrisies and sleeks the tongue with moss
who slithers between Man and Woman
who multiplies us only to divide
who adds and then subtracts to zero
ghost, slick as night-wet city streets
vinyl-skinned and glittering with devices
whose rock-pit is a gold-mine near Johannesburg
mammon
watching our children growing
never-closing nickel eyes minting their images
watch him, this god
rattle like dice, like thirty pieces of silver
watch him
flick and rustle a green promising tongue
watch him
grin like a wallet opening
watch him
as he whispers to you now.

The Ash Plant, by Seamus Heaney


November is usually the month when all the projects planned or merely dreamed of throughout the autumn comes crashing into reality to eat the days and weeks with a rapacious hunger. At this point, I'm past the most hectic period but since there's not much energy left for blogging, I'll put up this beautiful poem by Seamus Heaney, published in Seeing Things (Faber & Faber 1991). 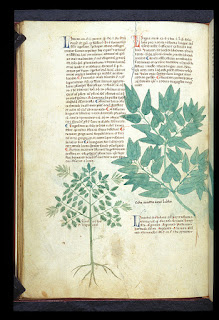 He'll never rise again but he is ready. Entered like a mirror by the morning,
He stares out the big window, wondering,
Not caring if the day is bright or cloudy.

An upstairs outlook on the whole country.
First milk-lorries, first smoke, cattle, trees
In damp opulence above damp hedges -
He has it to himself, he is like a sentry

Forgotten and unable to remember
The whys and wherefores of his lofty station,
Wakening relieved yet in position,
Disencumbered as a breaking comber.

As his head goes light with light, his wasting hand
Gropes desperately and finds the phantom limb
Of an ash plant in his grasp, which steadies him.
Now he has found his touch he can stand his ground

Or wield the stick like a silver bough and come
Walking again among us: the quoted judge.
I could have cut a better man out of the hedge!
God might have said the same, remembering Adam.

The Emptiness of Royal Gain

In the histories of kings it is a commonplace to find stories about ambitious men who rose high, achieved a sought-for throne, only to fall miserably a short time afterwards. Many great stories, true as well as fictional, are woven around this basic premise, and those of us who study medieval history are bound to encounter a fair share of such accounts, either in the guise of cautionary tales or as chronicled incidents. In the histories concerning medieval Norway prior to the twelfth century, such tales abound with such frequency that they seem sometimes endless. I have chosen a brief excerpt from one of these histories as an example. The excerpt in question comes from the book called Historia Norwegie, the first Latin account of Norwegian history that we know of. It was written in the middle of the twelfth century, but we know neither where nor by whom. Historia Norwegie is a rich and entertaining exposition of the geography and the royal history of medieval Norway.

After an account of the geography of Norway and its tributary islands including Iceland and the Orkneys, the historiographer begins his chronicle of Norwegian kings from the earliest period. Up until the time of Harald Fairhair in the 9th century, this chronicle is essentially a list of deaths following each other in quick succession, as will be seen.

Aun fathered Egill, nicknamed Vendilkráki, who was deprived of his kingdom by his own slave, named Tunni. The slave raised civil strife against his master in eight battles and won the Victory in all of them; he fell in the ninth, vanquished at last, but the kinghimself was soon afterwards gored to death by a ferocious bull. He was succeeded in the realm by his son Óttarr who was killed by a namesake
- Historia Norwegie, translated by Devra Kunin, printed in Phelpstead 2001


Sadly, there are no depictions of this brief footnote in the history of royal demise, so instead I have chosen to let this illumination of the death of Philippe le Bel of France serve as an illustration. 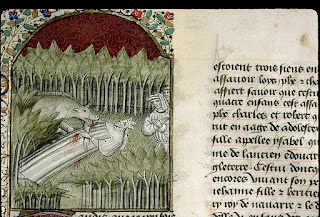 An explanation of tidewater by Adam of Bremen

Harald Fairhair and his dead queen (from Ágrip)

Bearded women in Norway and the Far East

This series of blogposts is inspired by a work-trip to Milan which the Centre for Medieval Literature arranged this September, and aims to present some of the many stories and cultural expressions connected to the cult of saints in and/or related to the city's history.

This post is a rather short one, presenting the famous sculpture of the flayed Saint Bartholomew, which is situated by the transept of the cathedral of Milan. The statue, finished in 1562, was made by Marco d'Agrate, a fact which he proudly displays in the legend on the stone underneath Bartholomew's feet. The text reads: Non me Praxiteles, sed Marc'finxit Agrat, "Not Praxiteles, but Marco d'Agrate made me". By this comparison to one of the greatest and most famous sculptors of the classical era Marco placed his own worth at the very summit of the artistic expression then in vogue in Late-Renaissance Italy. (Photographs taken by me.) 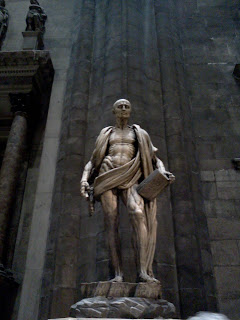 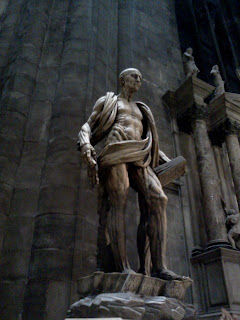 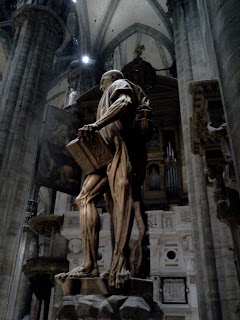 The gruesome and gruesomely realistic depiction of the flayed saint is not only intended to convey one of the most famous details from the story of Saint Bartholomew, it also serves to highlight Marco d'Agrate's intimate anatomical knowledge and his ability to render stone into the semblance of living flesh, where tendons and muscles are as well-crafted as the hairs of his dangling head-skin, worn in a manner not unlike the traditional depictions of Herakles draped in the skin of the Nemean lion.

The story of Bartholomew's martyrdom inspired a wide range of depictions of the saint throughout the medieval and early modern periods, and as a consequence his iconographic attribute is the knife by which he was flayed. It is also for this reason he is seen as the patron saint of tanners and all other trades related to the treatment of hide. According to the traditional, and rather apochryphal, legend, Bartholomew met his death in India where he was preaching the word of God. In Legenda Aurea the episode itself is briefly recounted as follows:

[T]he king tore the purple robe he was wearing, and ordered the apostle to be beaten with Clubs and flayed alive. Christians then took his body and gave it honorable burial. King Astyages and the temple priests were seized by demons and died.
- Jacobus de Voragine, The Golden Legend, translated by William Granger Ryan, Princeton University Press, 2012: 498

The manner of Bartholomew's death was given a similar, but less horrific rendition in Michelangelo's Last Judgement, in which the saint has been given the features of the playwright, poet and infamous pornographer Pietro Aretino. 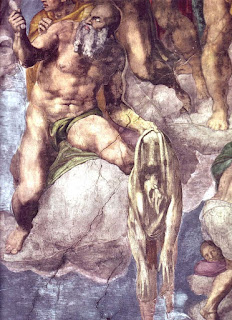 On the late-medieval iconographic development of Saint Sebastian