I recently finished reading Helen Dunmore's collection of poetry Bestiary from 1997 (published by Bloodaxe Books). This is the first book by Dunmore I have read, and it appeared in my pigeonhole at work because I had included this title during a inter-library loaning frenzy (in which I frequently indulge). This was a happy accident, because although I found the overall strength of the collection to be less touching than I had hoped, the book does indeed contain some very, very beautiful poems. In this blogpost I wish to present you with one of these, as indicated in the blogpost's title.


The woodlouse at the hem of St Francis' habit

The woodlouse at the hem of St Francis' habit
lay on its back, waiting for the saint to stroke it
and spin a prayer around its name.

Little woodlouse, God's armoured car
true inspiration of the Roman testudo
you and I are brothers, the same.

To the side of the picture St Clare
looked at St Francis with her face ajar
and the light comeing out of it
onto woodlice and spiders.

If a million woodlice honouring Francis
bore him on their backs, a burden
fit for their armour,
then Clare would be carried alongside
by the hundred million feet of centipedes -

she would not want more,
but in the lgiht of being a woman
she would want the same. 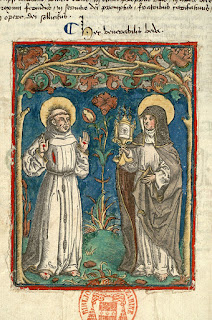 Scenes from a small Spanish village

This weekend I was in Spain to attend the wedding of two friends. The wedding itself was held in Ciudad Rodrigo, situated between the city of Salamanca and the border to Portugal, and it was a splendid affair to which I hope to return later on this blog. In this blogpost, however, I wish to present a few small glimpses from a small village, which is the native village of the bride and where there was a family barbecue the day after the wedding itself.

The village is called Pastores and belongs to jurisdiction of Ciudad Rodrigo. It is a very small place, and its present population counts to around 60 inhabitants. I am myself from a small place, and so I explored this little village with great fondness, and I was very happy to see the various ways in which the villagers had invested time, effort and pride into the arrangement of the village. 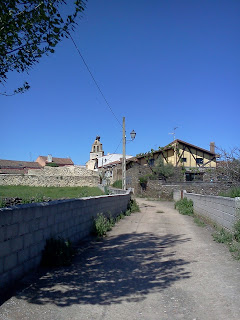 Entrance into Pastores along one of its two main streets, with the church in the background 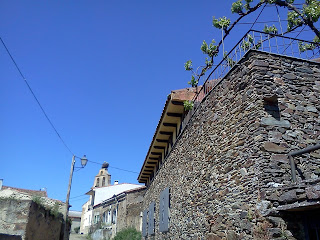 The most prominent building in Pastores is the church, as seen below. Fittingly, the church is presided over by a stork, who in its black and white plumage bears a striking resemblance to a Dominican friar. 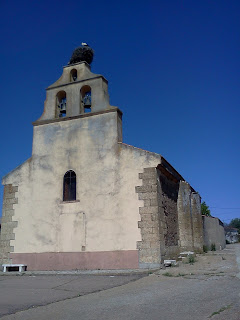 The church, with its guardian stork 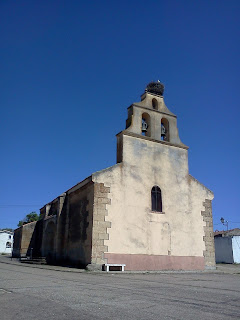 Like all Spanish villages with self-respect, Pastores has its own main square, the plaza mayor, as seen below. 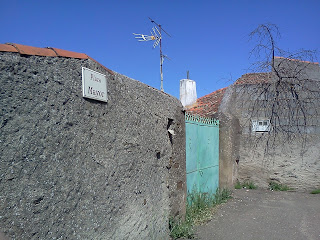 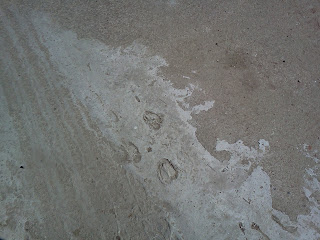 Hoofprints in the concrete

Perhaps the most charming feature of Pastores is the small, but beautiful botanical garden, which is kept at the very outskirts of the village. It is covered with various plants, but it is not completely without order, as the villagers have made space for some flowerbeds, separating the cultivated from the wild in the manner of a proper botanical garden. 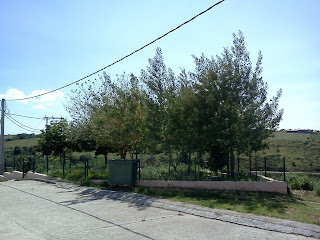 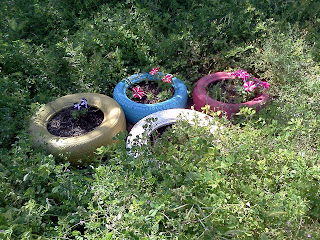 The Vanishing Islands - or, Excerpts from the cultural history of the whale


HAMLET: Or like a whale.
POLONIUS: Very like a whale
- Wiliam Shakespeare, The Tragedy of Hamlet, Act 3, Scene 2

Yesterday, it was the feast of Saint Brendan the Navigator (c.486-575), abbot of Clonfert. Most of his fame both today and in the medieval period owed much to the account Navigatio Brendani, which was written in the 8th or 9th century. This narrative recounts how Brendan and a group of monks set out in a boat - usually identified as an irish curragh - to find the gates of Paradise. They achieve their goal, but can not enter, and on their way they encounter several wonders of the seas, including an iceberg and a whale mistaken for an island. 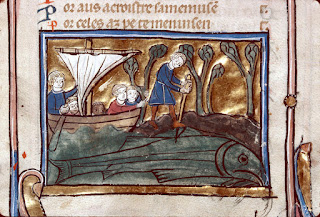 The episode of Brendan's landfall on a sleeping whale is perhaps the most iconic and well-known episode in the Navigatio. To confuse sea-beasts with islands has become a literary motif, and it might have been so already at the time of the Navigatio's composition. We find some brief excerpts of this motif's cultural history in Jules Verne's Twenty Thousand Leagues Under the Sea, where the three protagonists of the novel discuss the size of octopuses and provide some examples of such beasts being mistaken for islands.

Today I received a book which is very pertinent to the discussion of this motif, and in this blogpost I therefore wish to quote at length from it. The book in question is a translation of a twelfth-century bestiary by T. H. White (author of The Once and Future King), contained in Cambridge University Library, II.4.26. The MS was edited in 1928 by M. R. James. The quotation below does not come from the chapter on the balene, but the asipdo-delone, which is identified in the bestiary as a cetus, which, like balene, means whale. 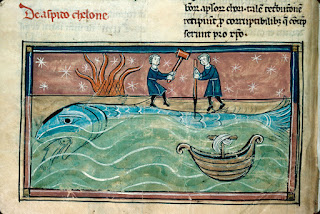 There is an ocean monster which is called an ASPIDO DELONE in Greek. On the other hand, it is called a WHALE (cetus) because of the frightfulness of its body and because it was this animal which swallowed (excepit) Jonah, and its belly was so great that people took it to be Hell. Jona himself remarked: 'He heard me out of the belly of Hell' [Jonah 2:2].

This animal lifts its back out of the open sea above the water waves, and then it anchors itself in the one place; and on its back, what with the shingle of the ocean drawn there by the gales, a level lawn gets made and bushes begin to grow there. Sailing ships that happen to be going that way take it to be an island, and land on it. Then they make themselves a fireplace. But the Whale, feeling the hotness of the fire, suddenly plunges down into the depths of the deep, and pulls down the anchored ship with it into the profound.

Now this is just the way in which unbelievers get paid out, I mean the people who are ignorant of the wiles of the Devil and place their hopes in him and in his works. They anchor themselves to him, and down they go into the fires of Hell.

The nature of this monster is that whenever it feels hungry it opens its mouth and blows out a sort of pleasantly-smelling breath, and, when the smaller fishes notice the odour of this, they crowd together in the mouth. Naturally, when the monster feels his mouth to be full, he shuts it at once. Thus he swallows them down.

That is the way in which human people who are lacking in faith get addicted to pleasures. They pander to their grub as if it we re perfume. Then suddenly the Devil gobbles them up.
- Bestiary, translated by T. H. White as "The Book of Beasts", Dover Publications, 2015: 197-98 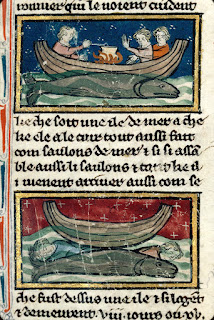 Oxen under the Sea (Adam of Bremen's treatment of the walrus)

The Chill of the Hunt (on how to hunt an elephant)

The Divided Child (Derek Walcott's poem on a beached whale)

The Legend of Gordianus and Epimachus


Yesterday, May 10, was the feast of Gordianus and Epimachus.  According to tradition, both saints are believed to have suffered at the same period. As for the the time of this period, sources differ. David Farmer sets the time of their martyrdoms at around 250, which corresponds to the persecutions during the reign of Decius. In Legenda Aurea, however, sets the time to c.360, and their deaths are linked to the reign of Julian the Apostate (361-363).

Although they are usually venerated together, at least in the later medieval period, it is clear from legend that they did not suffer together, and the veneration probably comes from the fact that they were both buried in the same church, although Epimachus was buried first. In the Old English Martyrology, however, only Gordianus is mentioned in the entry for May 10:

On the tenth day of the month is the feast of the martyr St Gordianus, whose body rests in Rome, and his commemoration is to be celebrated with masses in all churches.
- The Old English Martyrology, translated by Christine Rauer, D. S. Brewer, 2013: 103

As suggested by the entry from the Martyrology, very little was known about these saints even in the Middle Ages. A more expansive, but also more unreliable, account can be found in Legenda Aurea. 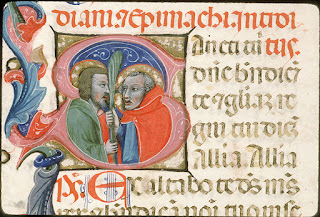 
Gordianus comes from geos, which means dogma or house, and dyan, which maens bright; hence a bright house in which God dwelt. Thus Augustine says in the book The City of God: "A good house is one in which the parts fit well together, and which is spacious and full of light." So Saint Gordianus was well disposed by maintaining harmony, spacious through charity, and filled with the light of truth. Epimachus comes from epi, above, and machin, king, so a high king; or from epi, above, and machos, fight, so a fighter for the things above.

Gordianus was a commissioner of Emperor Julian. Once he was trying to compel a Christian named Januarius to sacrifice to the gods, but listened to his preaching and, with his wife Mariria and fifty-three tohers, was converted to the faith. When Julian learned of this, he sent Januarius into exile and condemned Gordianus to be beheaded if he refused to offer sacrifice. So blessed Gordianus was beheaded and his body thrown to the dogs, but when it lay untouched for a week, his retainers took it away and buried it with the body of Saint Epimachius, whom the aforestaid Julian had had put to death a short time earlier. They were buried about a mile from the city about A. D. 360.
- Jacobus de Voragine, The Golden Legend, translated by William Granger Ryan, Princeton University Press, 2012: 308-09 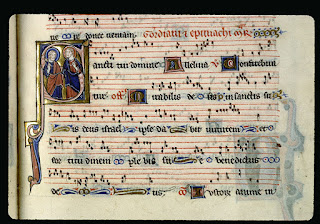 
The account by Jacobus de Voragine contains a number of motifs and topoi typical of the early martyr stories. The conversion of an antagonistic pagan and his family, the refusal to offer sacrifice to the pagan gods, the martyrdom of a largely unnamed crowd of Christians, and the saint's body thrown to animals but not devoured, and then buried in secret by other Christians. When these motifs are peeled away, it is evident that little which bears the resemblance of facts remains.