The strange labyrinth - a sonnet by Lady Mary Wroth translated

Lady Mary Wroth (1587?–1651/1653) is one of my favourite poets and sonneteers, and today I present to you the opening sonnet of her sequence "A Crown of Sonnets Dedicated to love" with a Norwegian translation of my own doing. The translation is followed by a literal rendition of it back into English, to better highlight how the compromise of translation has been carried out. The English text here given is taken from allpoetry.com. A crown, or a corona, is a sonnet sequence in which the last line of one sonnet becomes the first line of the next until they are all tied together.

Mary Wroth is an interesting figure of Elizabethan and Jacobean England, and her significant literary production was probably influenced by a number of her relations and friends. Her father was the poet Robert Sidney, brother of the more famous Sir Philip Sidney, and later in life she befriended Ben Jonson, who expressed great fondness for her. This is not to say that Mary Wroth's poetry was only influenced by those around her, she also influened others in turn. Ben Jonson claimed in one of his sonnets, that Mary Wroth's verse had made him "A better lover, and a much better Poët", and he dedicated his play "The Alchemist" to her. 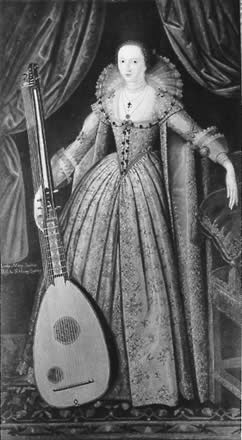 In this strange Labyrinth how shall I turne,
Wayes are on all sids while the way I misse:
If to the right hand, there, in love I burne,
Let mee goe forward, therein danger is.
If to the left, suspition hinders blisse;
Let mee turne back, shame cryes I ought returne:
Nor faint, though crosses my fortunes kiss,
Stand still is harder, allthough sure to mourne.
Thus let mee take the right, or left hand way,
Goe forward, or stand still, or back retire:
I must these doubts indure without allay
Or helpe, but trauell finde for my best hire.
Yet that which most my troubled sense doth move,
Is to leave all, and take the threed of Love. 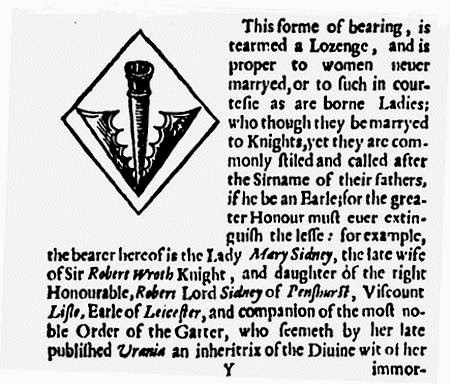 Mary Wroth's coat of arms, from Henry Peacham's The Compleat Gentleman (1622)
Courtesy of this website


A literal rendition into English of my translation

In such a labyrinth, where do I go?
I find a path and then the path is gone.
If I go to the right, love takesme then;
If I go straight ahead I'm filled with fear.
To the left? No, to suspicion then I went
And if I turn my shame cries "onwards, go!"
Do not faint if fortune breaks
But worst of all is waiting, just to stand.
So let me then to each of all sides go,
Back, perhaps, forward, or to stand?
All doubt I must best handle like I use to
And without help I find the best of shoes.
But that which most of all will make me move
Is to abandon all for the path of love.