Yesterday I received the happy news my article "Strategies for constructing an institutional identity: three case studies from the liturgical office of Saint Edmund Martyr" has been published by the Open Library of the Humanities, Cambridge, in the special essay collection Authors, Narratives, and Audiences in Medieval Saints’ Lives edited by Katharine Handel. The article is open access and is available for download here. The abstract of the article is as follows.

The following article explores some of the ways in which the leaders of a medieval ecclesiastical institution, in this case Bury St Edmund, could construct that institution’s own identity by textual production that was centred on the figure of their patron saint, Edmund Martyr. This textual production, and the formulation of Saint Edmund, underwent a continuous development from 1065 onwards, which can be most clearly seen in the composition of the liturgical office for Edmund’s feast day. By an examination of three examples taken from this office, I aim to demonstrate some of the ways in which the figure of Edmund was altered, how the narrative of his passion story was developed and what audiences these changes were aimed at. The purpose of the article is to emphasise the function of the office as a vehicle for the construction of institutional identity in the Middle Ages.
Lagt inn av Steffen kl. 05:50 Ingen kommentarer:

The living page - marginal notations in the Nuremberg Chronicle

Earlier this week, I went to the reading room of the university library of the University of Southern Denmark to research some of their liturgical fragments. As I was picking up the items I had ordered, I noticed that their copy of the Nuremberg Chronicle was available and I decided to have yet another look through this magnificent historiography. I have leafed through this book several times, but I'm always happy to return to it and notice new details in its beautiful woodcuts. One of the aspects I particularly enjoy about this volume is its many marginal notations. The book belongs to a collection which the university library purchased from Herlufsholm School in Sjælland in 1968, and therefore this volume of the Nuremberg Chronicle has been part of the education of many young Danish boys in the sixteenth and seventeenth centuries. Leafing through these centuries-old pages consequently brings many reminds that these pages are living pages, in that they were actively used and enscribed with notes, presumably to make it easier to find some crucial passage in the preparation for a test or an exam. 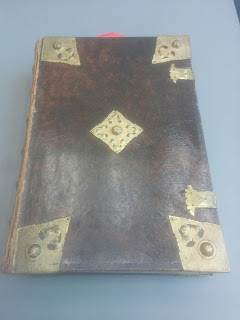 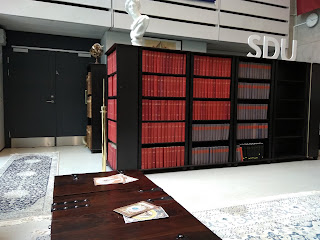 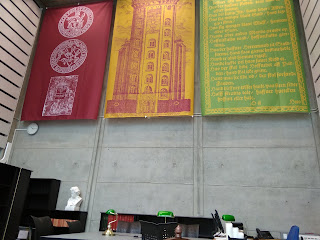 The reading room of Syddansk Universitetsbibliotek


This time I was particularly drawn to this page, which describes the geography and zoology of various parts of the world in a mixture of classical Roman learning and biblical history. As can be seen, this page appears to have held many important pieces of information for a young student, as he (and it must have been a he since Herlufsholm was an all boys school) has taken extensive notes concerning various geographical locations, such as Africa, Ethiopia and Pentapolis (the five North African Roman cities Apollonia, Cyrene, Ptolemais, Taucheira and Berenice). As can be seen in the notation pointing out Africa, the student has also noted the name of Noah's son Cham, traditionally believed to be the one repopulating the African continent after the flood. 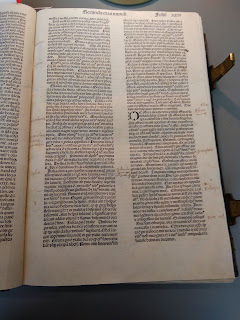 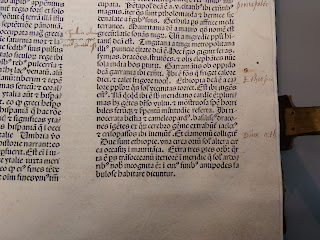 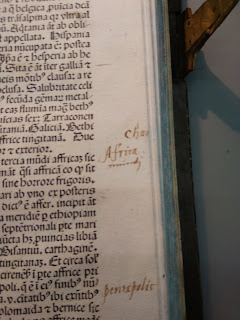 These notations are important pieces of evidence to the reception history of the Nuremberg Chronicle in a specific educational environment, and these notations might be valuable clues into the education at Herlufsholm in the Early Modern Period. And most importantly, they remind us - if any reminder were needed - that old, carefully curated books also once were new and actively used, just as we now make notes in the books of our curricula and reading lists.

Trout - a poem by Seamus Heaney

Trout
Hangs, a fat gun-barrel,
deep under arched bridges
or slips like butter down
the throat of the river.

From depths smooth-skinned as plums
his muzzle gets bull's eye;
picks off grass-sseed and moths
that vanish, torpedoed.

flat; darts like a tracer-
bullet back between stones
and is never burnt out.
A volley of cold blood

Saint Bartholomew's devil - on the moon


I'm currently reading Cyrano de Bergerac's satirical utopian novel Voyages to the Moon and the Sun (Les Histoires comique des États et Empires de la Lune et Soleil), the first part of which concerns the protagonist's journey to the moon where he encounters a civilisation of large humans who walk on all fours, and - in the fashion of the topsy-turvy world of utopias - conduct most of their affairs in a very different manner from those of Cyrano's native seventeenth-century France. The novel contains a lot of interesting details, espcecially for its debt to older novels of moon travel and utopian societies and its influence upon later novels. As a medievalist, however, there was one particular detail which caught my attention, and which served as yet another reminder that the stories of the saints as they were told throughout the Middle Ages, continued to be told and to have an influence on writings and story-telling in what we now call the Early Modern Period.

The detail in question comes at the very end of the novel, where the protagonist discusses the existence of God with the master of the house in which he is lodging. This master is a young man, because on the moon the reverence for age is turned upside down and so he is the sharpest wit of the house and treats his father as unpleasantly as a father in Cyrano's France might treat his son. Cyrano used this device of the contrary world to explore matters of theology, statemanship and sexuality in his own time by using the quadruped men of the moon as a mirror to his own society and a mouthpiece for his own ideas. The young moon-man lambasts the novel's protagonist for the latter's belief in God, and delivers an argument against it. After the main point of the lecture is delivered, however, a knock on the door is heard and in enters - in the translation of Richard Aldington - "a large, black, hairy man" who "approached us, seized the blasphemer by the middle and carried him off up the chimney."

The protagonist grabs hold of the moon-man out of pity and attempts to draw him back, but is himself carried off and follows the devil and the damned moon-man back to earth, where the protagonist manages to let go just before the devil enters Hell in the earth's interior. This devil serves both to ward off any potential censorship of the novel and of Cyrano's person, since Cyrano's lunar mouthpiece is sentenced to eternal damnation for his atheism. Yet at the same time, this damnation is only set in motion after the main argument has been delivered and before the protagonist has a chance to rebut it and thus prove God's existence, thus leaving the matter on the side of Cyrano. Moreover, the devil serves as a useful device for sending the protagonist back to Earth in a speedy manner. 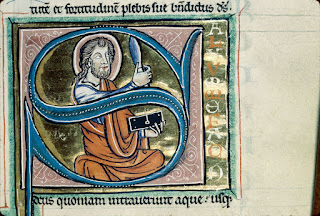 
The reason why this detail caught my attention as a medievalist, however, is the description of the devil as a black man, indeed as an "Ethiopian". This description of the devil has its root in early Christian apocryphal literature, and there are in particular two episodes of early Christian hagiography that has helped disseminating this image into the popular imagination of later centuries. The first instance is found in the Life of Antony of Egypt written in the mid-fourth century by Athanasius of Alexandria. Here, Antony encounters a being called the "spirit of fornication", which is described as an ugly black boy. A slightly more elaborate description, however, is found in the legend of Saint Bartholomew (discussed in this previous blogpost), which was a legend popularised through various collections of the stories of the saints, perhaps most importantly Jacobus de Voragine's Legenda Aurea. In the legend of Saint Bartholomew, we read how he travelled to India to convert its inhabitants to Christianity, and there encountered a devil who was worshipped as a pagan god. This devil is described as having the guise of an Ethiopian, just as the devil visiting Cyrano's blasphemer on the moon. The appellation of "Ethiopian" echoes a long-standing confusion in ancient and medieval geographical learning in which India and Ethiopia were situated very close to one another and were sometimes talked about as neighbouring countries, or as an interchangeable shorthand for a distant, exotic place.

Cyrano does not mention Saint Bartholomew, and neither does he have to. The imagery of the devil as an Ethiopian is clearly influenced from the apocryphal legend, and its survival well into the seventeenth century is an important testament to the endurance of these stories of the saints, and the impression they exert on the literary imagination.