Two poems for Saint Brigid of Kildare by Seamus Heaney

Tomorrow (February 01) is the feast of St Brigid of Kildare, founder and abbess of the monastery of Kildare and one of Ireland's major saints. She is believed to have been baptised by St Patrick and died around 525. However, since the earliest lives date to the sixth century there is good reason to question her historicity, especially in light of the attempts of Kildare Monastery to buttress their claim to monastic supremacy in Ireland through her figure. The hagiographical material echoes her dubious place in history since it is largely comprised of miracle stories. One of the most famous of these is how she dried her clothes on a sunbeam when she could find nowhere else to hang them. This miracle is recounted in the South English Legendary, compiled in the latter half of the 13th century.

Brigid's miracles are also recounted by Gerald of Wales in his exposition of the Irish saints. In a previous blogpost I wrote more thoroughly on this, so suffice it to say that Gerald warned the Norman conquerors of Ireland not to transgress against Brigid and her places of worship, as she was - like all Irish saints according to Gerald, of a very vindictive nature. 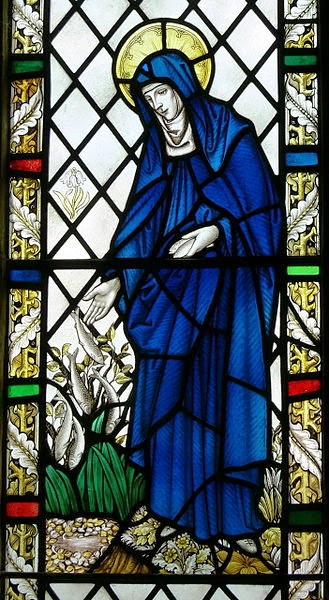 Saint Brigid has also caught the fascination of Irish poet Seamus Heaney, so for Brigid's day tomorrow, I here present two poems featuring the abbess (with thanks to Trias Thaumaturga).

(from The Spirit Level)

Last time I wrote I wrote from a rustic table

Under magnolias in South Carolina
As blossoms fell on me, and a white gable
As clean-lined as the prow of a white liner

Bisected sunlight in the sunlit yard.
I was glad of the early heat and the first quiet
I'd had for weeks. I heard the mocking bird
And a delicious, articulate

Flight of small plinkings from a dulcimer
Like feminine rhymes migrating to the north
Where you faced the music and the ache of summer
And earth's foreknowledge gathered in the earth.

Now it's St Brigid's Day and the first snowdrop
In County Wicklow, and this a Brigid's Girdle
I'm plaiting for you, an airy fairy hoop
(Like one of those old crinolines they'd trindle),

Twisted straw that's lifted in a circle
To handsel and to heal, a rite of spring
As strange and lightsome and traditional
As the motions you go through going through the thing.

From Crossings
On St. Brigid's Day the new life could be entered
By going through her girdle of straw rope
The proper way for men was right leg first
Then right arm and right shoulder, head, then left
Shoulder, arm and leg.
Women drew it down
Over the body and stepped out of it
The open they came into by these moves
Stood opener, hoops came off the world
They could feel the February air
Still soft above their heads and imagine
The limp rope fray and flare like wind-born gleanings
Or an unhindered goldfinch over ploughland.
Lagt inn av Steffen kl. 05:50