In the 12th century the royal saint Edmund of East Anglia (d.869), better known as Edmund Martyr, enjoyed a substantial cult, centered at the powerful abbey of Bury-St-Edmunds in Suffolk. Some scholars claim that Bury was the most popular destination for pilgrimage around 1140 - although eventually outshone by Thomas Becket's shrine in Canterbury - and the abbots (among them Samson who reigned 1180-1211) enjoyed great power and many privileges of both clerical and secular nature. Throughout the 12th century new hagiographies for Edmund were written, and Edmund's cult became more widespread in Western Christendom. 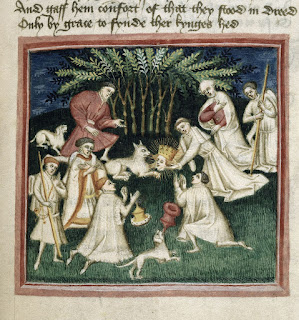 
However, one text written towards the end of the 12th century includes what we might call an irreverent allusion to the legend of St. Edmund. The saint himself is not referred to by name, but the detail alluded to is so iconic that it is no doubt about its origin. The work in question is Speculum Stultorum, written by a Benedictine monk from Canterbury named Nigel (c.1135-98?), who is also known as Nigel Wireker, Nigel Whiteacre, Nigel of Canterbury or Nigel de Longchamps. Speculum Stultorum was Nigel's most popular work and it is a satirical beast-fable written within the timeframe November 1179 - March 1180, dedicated to William, possibly the chancellor of Christ Church at Canterbury.

Speculum Stultorum recounts the story of Bursinus, an ass meant to represent an ambitious religious man, who tries to get a new tail, attempts to acquire a university education and vainly aspires to found a new religious order. The poem belongs to the beast-fable tradition, which originated in the mid-eleventh century with the anonymous Ecbasis Captivi and was reinforced in the fable collection Ysengrimus from 1148 by Nivard of Ghent. The latter was also most likely the basis for the stories about Reynard the Fox. 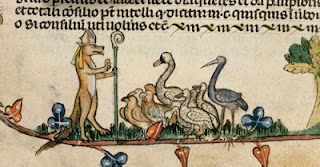 
Nigel Wireker was critical of the university education burgeoning in Paris - where he had himself most likely studied - and viewed other religious orders with scepticism. It is therefore only natural that a part of Speculum Stultorum is dedicated to satirising various religious orders, among which were the Albis Monachis, the white brethren, better known as the Cistercians. It is in this section (lines 2111-2182) Nigel refers to the popular Saint Edmund legend. The Cistercians were - and perhaps still are - prohibited from eating meat, but Nigel claims they did eat it, only they made sure to bury the remains:

Do not waste time looking for leftovers of the meat,
The bones do not shout "here, here!" from the grave in which they are tossed.
- my translation 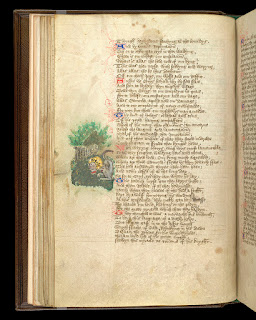 
The allusion is to the popular, and often depicted, legend of Edmund's head. Tradition stated that when Edmund had refused to surrender to the torturing Vikings - and, some say, not given up the location of his treasure - he was decapitated and his head was tossed into the woods. The head - guarded by a wolf - started to call out "here, here, here", and was eventually found, rescued and reunited with the body. The Cistercians, however, took pains not to let the bones of the food give themselves away in a similar manner and buried them in the ground to prevent them from calling out to people passing by. That is, if we are to believe the contentious Nigel Wireker. 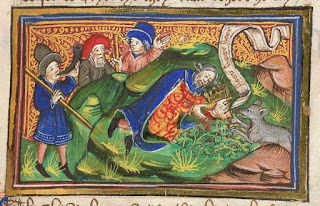 
All images courtesy of British Library.