Address to the toothache - a poem by Robert Burns

I try not to get too personal on this blog, as it is mostly inteded for sharing scholarly or cultural things that interest me or that I find worth sharing or talking about, and also pictures of nature. However, this time I give you a poem by Robert Burns which mirrors my own personal life for the few days, in which I have been struggling against that most aweful of tortures, a toothache. Burns' poem provides the perfect description. I have here taken it from bartleby.com. The poem came readily to mind during these travails, as it is a hauntingly comic work which I've had somewhere on the periphery of my mind ever since I first read it in an excellent translation into Norwegian by Johannes Gjerdåker, several years ago.


Address to the toothache


MY curse upon your venom’d stang,
That shoots my tortur’d gums alang,
An’ thro’ my lug gies mony a twang,
Wi’ gnawing vengeance,
Tearing my nerves wi’ bitter pang,
Like racking engines!

When fevers burn, or argues freezes,
Rheumatics gnaw, or colics squeezes,
Our neibor’s sympathy can ease us,
Wi’ pitying moan;
But thee—thou hell o’ a’ diseases—
They mock our groan.

Adown my beard the slavers trickle
I throw the wee stools o’er the mickle,
While round the fire the giglets keckle,
To see me loup
While, raving mad, I wish a heckle,
Were in their doup!

Where’er that place be priests ca’ hell,
Where a’ the tones o’ misery yell,
An’ ranked plagues their numbers tell,
In dreadfu’ raw,
Thou, TOOTHACHE, surely bear’st the bell,
Amang them a’!

The hunt of the griffin - a detail from Trogir cathedral


In a previous blogpost I gave a brief introduction to the portal of the cathedral of Trogir in Croatia. The main parts of this portal were carved by the master mason Radovan in the mid-thirteenth century, and as a whole the portal displays familiarity with both Northern Italian as well as Byzantine iconography. In its complex net of images and stories, the portal of Radovan is an exceedingly beautiful example of the skill of medieval masons, and it also provides a great example of the iconographical influences that shaped the art of medieval Croatia.

One example I want to highlight here is a hunting scene in which a griffin is depicted in the moment it captures a pig. The griffin is a familiar feature in medieval iconography, and its medieval reception history is complex and long. In The Divine Comedy, for instance, Dante describes how a griffin was drawing the car of Beatrice and in this the griffin belonged to the side of good. However, griffins could also be representatives of the wild regions beyond Christendom where paganism reigned and where there were no civilisations. This can be seen in how griffins were described in Pliny, who relied on Herodotus' description which in turn relied on the now-lost work of Aristeias. According to this classical tradition, griffins were guardians of gemstone mines in the far north near the cave Geskleithron, the abode of Boreas the north wind. These mines the griffins guarded from attacks by the one-eyed nation of the Arimaspi.

The depiction of the griffin in Radovan's portal is also a demonstration of the griffin's fierce aspect. Here we see the griffin in the moment it has struck a helpless pig and begun biting its face. This scene is remarkable for its beautiful execution. Moreover, it is noteworthy for its typicality. This scene is one that can be found in various versions in medieval bestiaries, where the antagonism between the griffin and the pig is firmly established. As such, Radovan's depiction not only displays his skill but also his familiarity with an established icongoraphical canon that in consequence reminds us that medieval Croatia was not a strange periphery but part of a wide-reaching network of ideas and images that spanned the Latin West and beyond. 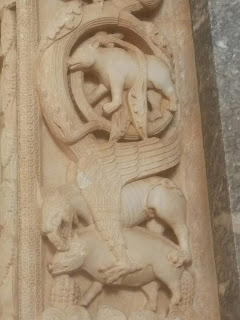 Griffin and pig by Master Radovan

Book repair from the past


A few months ago, my colleague Jakob Povl Holck at the university library of University of Southern Denmark sent me a batch of photographs from a book he had recently examined. The main attraction of this book was the liturgical fragment on its cover, and which I might return to in a later blogpost. But I was also struck by the frontispiece of the fragment carrier, which is an edition of Eusebius' Chronicon translated into Latin by Jerome - the Chronicon only survives in translations as the original in Greek has been lost - and which was printed in Paris by the printer Henricus Stephanus, also known as Henri Estienne (1528-98).

As can be seen below, the frontispiece shows a beautiful, if incomplete, reparation in which the central roundel has been reconstructed, and in which the original abbreviation of "eius" has been retained in the missing words written out by pen. Understandably, the elaborate knotwork and fronds have not be recreated, but it is clear that the repair work has been undertaken with great care.

We do not know when the frontispiece was repaired. We do know that the book was kept at Herlufsholm School in Denmark for a long time - although we do not know when it came there - and it is easy to imagine that the tear has happened due to carelessness on the part of a Danish student possibly struggling with the sheer size and weight of the book. It is, however, equally possible that the work has been commissioned by the bibliophile who quite likely purchased this work and then later donated it to the school.

Although scholarly speaking the liturgical fragment of this book holds the greatest fascination for me, and the greatest mysteries, there is something very pleasing about such a repair work as this, and I keep coming back to it. 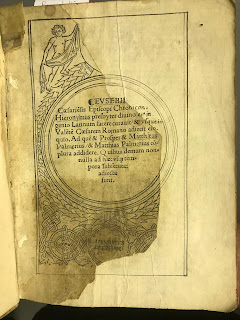 Music for the season - Ana Vidovic and Isaac Albéniz


Even though it is a significantly warmer October than usual, there is still an unmistakably autumnal feel about these days, a certain crispness in the air, and the scent of rotting leaves and distant aromas of mulch and soil. Somehow, this mood seems to me to be perfectly encapsulated by the instrumental piece "Asturias" by the Spanish composer Isaac Albéniz (1860-1909), here mesmerisingly performed by Ana Vidovic.