Edward the Confessor in the North

Ever since completing my MA thesis I have had a potentially unhealthy obsession with Edward the Confessor. This is why I tend to use him as a point of reference when exploring the medieval catalogue of saints, and this is also why I keep a lookout for his iconography, and I'm always excited to learn of new images and new renditions of him. For this reason I was very happy to find a stained glass window in York, which to my mind most likely depicted Edward the Confessor, and this blogpost gives an introduction to Edward's standing in the North. 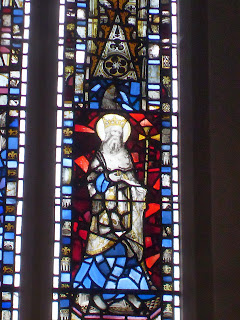 The above stained glass can be found in St. Helen's Church, York, and dates to the later Middle Ages. The church is situated in the centre of York and was the parish church of glass-painters who resided in Stonegate, and their emblem can be found among the extant stained glass paintings. 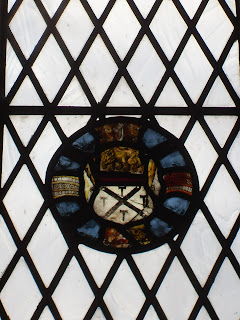 The window portraying Edward the Confessor is placed in a group comprised of - from left to right - William of York, the Virgin Mary and St. Helen. Edward is the rightmost figure, and as seen above he holds an object which looks like the ring he reportedly received from John the Baptist, and which was one of his major attributes in medieval renditions of him. The story was told by Aelred of Rievaulx and gained immense popularity. In the information leaflet provided in the church, it is suggested that this figure is Emperor Constantine, but this is highly unlikely since he was not considered a saint in medieval times - at least not officially. In a book on stained glass in York which I stupidly forgot to note, but which can be bought at Waterstones in the city, it is stated that the glass does indeed depict the Confessor, though no evidence is cited for this. I, however, believe this to be the only likely explanation for iconographic reasons. 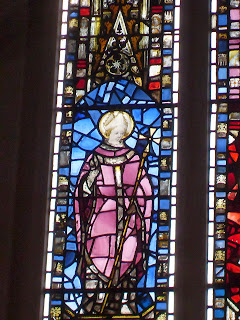 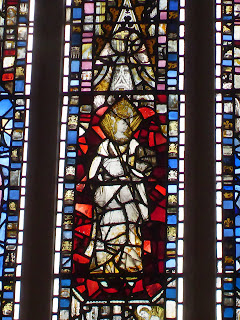 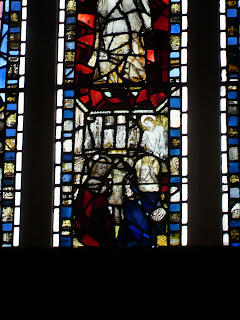 Interestingly, this painting situated below that of the Virgin Mary, may also depict the Confessor, possibly together with St. John the Evangelist, to whom Edward was especially devoted 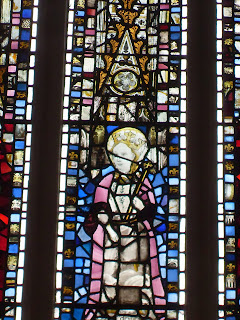 
After this find I went to visit York Minster's undercroft where I happened to note a roof painting from the York Minster chapter house depicting St. Edmund of East Anglia. The painting in question dated from c.1290. I was quite excited to see this, since I have a major fascination for the cult of St. Edmund as well as that of St. Edward, and these two saints often appear together in later medieval art (and also sometimes in literature). This was the second depiction of St. Edmund I had found in York, the first being a carving from St. Mary's Abbey, which was refurbished in the 13th century. The figure can be found at Yorkshire Museum together with St. Cuthbert. 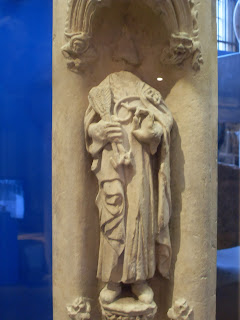 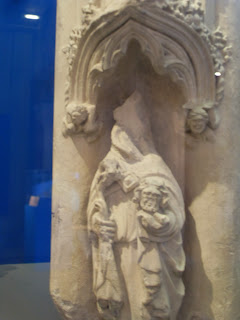 
After having found St. Edmund, I went to ask one of the curators whether there were any depictions of Edward the Confessor in the Minster, and he told me there was none to be found to my initial surprise, seeing as the Confessor had in his time been generously munificient towards the Minster. The curator was wrong, however, as there is a 14th-century depiction of Edward in the lady chapel, but this I learned later. As I talked about the subject with the curator, however, I remembered a few important details from my MA research which made it all abundantly clear why Edward should ostensibly - yet incorrectly - not be present in the York Minster art programme. 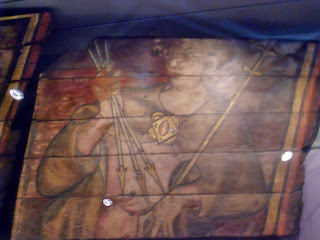 This division in the English medieval church runs deep, and when Osbert of Clare failed in his petition to have Edward canonised by the Papacy around 1138, lack of wide ecclesiastical support was probably one of the main reasons why he failed, together with King Stephen's meddling in the Church's affairs. After the Anarchy, however, Alexander III granted the request for canonisation due to the wide clerical support Osbert that had been lacking earlier, and the 12 surviving petition letters do indeed represent a wide clerical spectrum, including the Archbishop of York. However, this unity proved deceptive and when Edward the Confessor was translated to a new tomb at Westminster on October 13 1163, only the diocese of Canterbury was represented.

The lack of devotional paraphernalia pertaining to Edward the Confessor in York suggests that this strife between the two archbishoprics were long-standing and that to the northerners, Edward the Confessor remained a southern saint. It should also be noted, however, that Edward never achieved any wide popularity beyond Westminster and the royal court, so this is not very surprising after all. However, not even Henry III's presence in York - he refurbished Clifford's Tower as his royal manor - was sufficient to move York towards greater appreciation of Edward, and instead the citizens and the clergy focussed on local saints and, as it seems, St. Edmund, whose fame rivalled that of Edward for most of the 12th and 13th centuries in the country at large. Interestingly, this goes contrary to the claim made in the liturgy for Edward the Confessor, composed at Westminster in the 12th century, where it is stated that the entire country rejoices in his sanctity.

I do not know who commissioned the stained glass windows of St. Helen's and York Minster's lady chapel, or what moved the former to place Edward alongside an important local saint such as William of York. Nonetheless, this is an interesting anomaly in York's devotional landscape, and it shows the disparity between the overarching devotional trends and personal preference.

It is of course important to note that absence of evidence is not evidence of absence, and it may be that Edward had a more prominent role among York's medieval citizenry than has been known or is suggested by the surviving material. Yet ecclesio-political considerations suggest that there is not much to find in this department, and it is perhaps emblematic that the only church around York dedicated to Edward that I know of, is the 19th-century church at Dringhouses.

Hope, Steffen, The King's Three Images - The representation of St. Edward the Confessor in historiography, hagiography and liturgy, Trondheim, 2012

Williamson, E. W. (ed.), The Letters of Osbert of Clare Prior of Westminster, Oxford University Press, 1998