vanity of vanitites; all is vanity
- Ecclesiastes 1:2

No state in erd here standis siccar;
As with the wind wavis the wicker,
So wavis this warldis vanitie
- Lament for the makaris, William Dunbar

Why then doth Flesh, a Bubble-glass of Breath,
Hunt after Honour and Advauncement vain,
And rear a Trophee for devouring Death,
With so great Labour and long-lasting Pain,
As if his Days for ever should remain?
Sith all that in this World is great or gay,
Doth as a Vapour vanish and decay.
- The Ruines of Time, Edmund Spenser

One of the most prevalent and, to my mind, fascinating themes in 16th- and 17th-century culture is the vanitas, the meditation on human transience and the inherent futility in any human endeavour when faced with the brevity of life. This theme relies of course on the great philosophical heritage of the Judeo-Christian tradition (with Ecclesiastes as the most immediate and influential source) and also the Latin tradition as exemplified by the stoicism of Seneca. However, that this should burgeon into a category of its own in art and poetry in the 16th century, can only be explained by various meditations on death in late-medieval culture that appeared after the Black Plague, and in a way one might consider the vanitas to be the natural conclusion to and the apex of a cultural current that began in the 14th century, where the potential imminence of death and its ubiquity served as a reminder that one should keep one's life in order and not stray from the narrow path, a memento mori keeping the fickle nature of mankind in check in the expectation of God's final judgement. This evolved into the cultural expression of vado mori, I go to die, which had as its core the idea that as you lived, so would you also die, and the trick was to live a good, Christian life lest one should fare very badly. 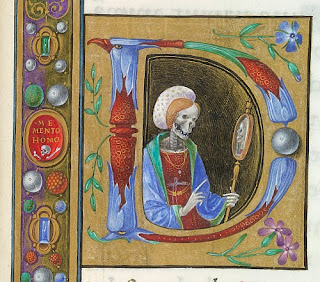 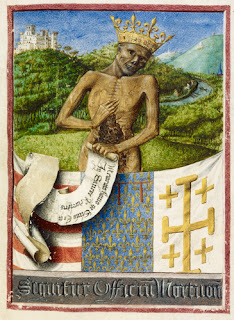 
In the 16th century this mode of thought grew into a coherent, pronounced theme which was called vanitas, which often was presented through a collection of symbols with connotations of transience and brevity, such as the flickering or extinguished candle or lamp, the skull, the fading flower, the empty glass and so on. In some cases also the cultural or political pursuits of mankind were represented, either through musical instruments, a globe or political paraphernalia. Very frequently this was expressed in still lives, but could also be executed in more dramatic paintings, as seen below in Juan de Valdés Leal's (1622–1690) In ictu oculi from 1672. The title comes from 1 Corinthians 15:52 and means "in the blink of an eye". 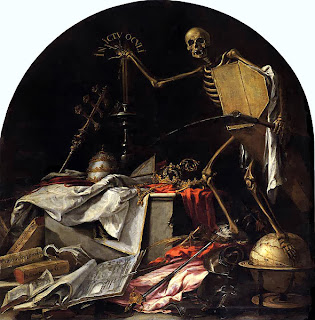 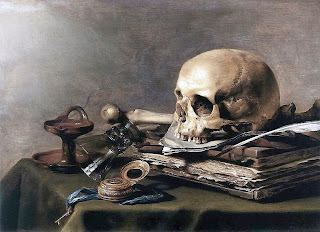 
The vanitas genre also had a sub-genre known collectively as homo bulla est, man is a bubble, where one single metaphor was expressed in various ways, often with a putto blowing bubbles, showing painfully well the fragile nature of life. One of the most well-known and emblematic renditions of this sub-genre can be seen below, made by Hendrik Goltzius around 1594. 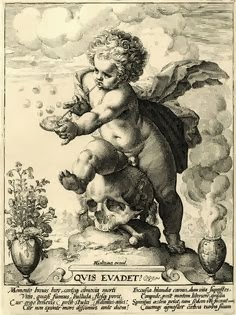 
These paintings are just a few examples of this wide-spread and long-lasting genre of art, and there are many other beautiful renditions of the theme to be found. I find it very interesting that this mode of thought should be expressed through a medium that is of itself a symbol of man's transience and futility along with so many other human pursuits like music or poetry. The painters must have been aware of this, and this reflection can also be found in literature as well. Remember that this is the time when Edmund Spenser had his Colin Clout break his pipe and Shakespeare made Prospero bury his books "deeper than did ever plummet sound", both of which have been interpreted as renunciations of the poetic pursuit.

This is, as stated, merely an introduction to this cultural phenomenon, and maybe I'll put up a few more in time. In any case, in a year when the word "selfie" as become Oxford Dictionary's word of the year, and when exhibitionism appears to be more or less unbridled, it is sometimes nice or at least useful to cast one's eyes a bit wider than the immediate moment.