In 1297, Pope Boniface VIII canonized King Louis IX of France (1214-70). This canonization was the result of an investigation into testimonials by witnesses and consultation of the various biographies that were written in order to testify to the dead king's holiness. Ever since Louis' death from dysentery in Tunis at the beginning of the Eighth Crusade, several interest groups had begun lobbying for a canonization of the king. Among the most important of these groups were the French king Philippe IV Le Bel (Louis' grandson), the Dominican Order, and the Franciscan Order. For the latter two groups, Louis IX had been an important patron, and he was also an ideal Christian king.

As mentioned, in order to provide solid, written evidence for Louis' holiness, an unusual large number of hagiographical accounts were produced prior to the canonization. When the pope had affirmed that Louis was indeed among God's holy, there were also composed liturgical offices in honour for his feast-day, his dies natalis, which was the day of his death, August 25.

Since Louis the king and saint was of great importance to several groups, there were composed many offices - some of which were merely different versions of the same basic template - and the Dominicans, the Franciscans and the Cistercians all had their own offices. To the mendicant orders, Louis was the ideal king to which all other French kings should be measured, and their textual production centred on Louis should also be understood in this regard, namely as attempts to influence the behaviour of the current king.

Also to Philippe IV his grandfather appeared as an ideal king, and also as an important facet in the mythology of French kingship which by that time was already expansive and complex, drawing on elements from Merovingian and Carolingian history as well as from the Capetian dynasty. In other words, Louis IX was an important pillar by which Philippe IV's own reign was supported.

In the midst of this turbulent period, there was composed a poem by Gerard du Bus which addressed the troubles of the French monarchy through an allegory. The poem is called Roman de Fauvel, and chronicles the rise of the donkey Fauvel from his insurrection against his master to his accession to the French throne. Fauvel marries one of Dame Fortune's handmaidens, Vainglory, and together they populate the garden of France with their unholy offspring, and it is revealed that Fauvel is indeed Antichrist. 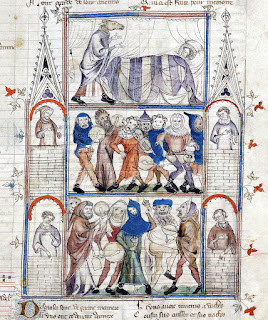 
The poem is an attack on corruption and abuses by political and religious men, and serves as a warning for the young king - presumably Philippe V - of the importance of a strong, virtuous ruler, and the necessity of not allowing little Fauvels to rise to positions of power. The poem survives in a manuscript from 1316, BnF fr.146, so it was composed in the midst of a very uncertain period of the French monarchy.

In BnF fr.146, the narrative of the Roman de Fauvel is interspersed with musically annotated songs, providing another dimension for its performance. And we should assume that the Roman has indeed been performed for the young king Philippe. One of the aspects of the Roman de Fauvel is that here, too, good kings are presented to the young king as ideals worthy of emulation. Unsurprisingly, Gerard du Bus makes use of Philippe V's own great-grandfather Louis IX as one such ideal king. As a consequence, despite the darkly satirical mode of Roman de Fauvel, also here we find Saint Louis serving as an edifying model, similar to one of his purposes in the hagiographic corpus (which naturally includes the liturgical offices).

In this way, the offices for Saint Louis and the Roman de Fauvel function as a kind of mirror images to each other. They both share a purpose, namely to shape the future of the French monarchy. Of course, this is not a purpose they both share to the same extent. The liturgical offices had as their primary goal to honour the saint in Heaven so that he would act as their ambassador in the court of God. Consequently, the liturgical attempt to shape the future of the monarchy was less direct in that it addressed the saint and exhorted him for divine intervention.

The Roman de Fauvel, on the other hand, is addressed directly to the king and seeks to influence its audience by holding forth a story of a possible future disaster - in modern parlance we might call it dystopian. Therefore, the similarities between the Roman and the offices should not be overemphasized or simplified, but in the end they both apply the figure of the holy king Louis as a key figure in their respective narratives, and they both seek to influence worldly events through the performance of their texts. 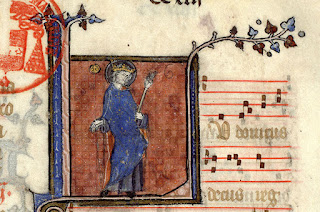