A lost legend about the finding of Saint Stephen's relics

The story of Stephen Protomartyr is well known in history of Christianity, and he is widely hailed as the first Christian to have died for his belief in Christ, as recorded in Acts 7:54-60. Since he was killed by stoning, the stone is his primary iconographical attribute. His death-day, the dies natalis, is celebrated on December 26. 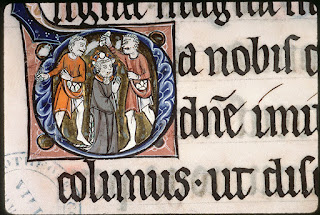 
However, there is also another feast dedicated to Stephen in the medieval sanctorale, and that is the feast marking the anniversary for the finding og his bones, the inventio. The story of this find dates back to the fifth century, and was - at least according to Jacobus de Voragine in Legenda Aurea - first recorded by the historian Gennadius of Massilia (d. c.496). The legend tells us that a priest in Jerusalem called Lucian had a vision in which Gamaliel (Acts 5:34; 22:3) tells him where to find the body of Saint Stephen, along with the body of himself, Nicodemus and others. Lucian hesitates, however, since visions are not always to be trusted. Gamaliel appears a second time, and tells Lucian how he will be able to distinguish between the bones in the burial place. Gamaliel points to four baskets, three in gold and one in silver, and says that Lucian will be able to distinguish between the relics by way of the content of these baskets. One was filled with red roses, two were filled with white roses, and the fourth basket was filled with Saffron. These baskets represented the coffins of the saint, and the red roses signified the martyrdom of Saint Stephen. Lucian still hesitated. When the vision of Gamaliel occurs a third time, Lucian considered the vision to be true and followed the instructions he has been given. Jacobus de Voragine describes the finding itself accordingly:

As soon as they began to dig, the earth shook and a sweet odor spread, and its fragrance, by the merits of the saints, freed seventy sick people of their infirmities. The relics of the saints were transferred with great rejoicing to the church of Sion in Jerusalem, where Saint Stephen had functioned as arch-deacon, and were given honorable burial there. At that very hour a great raistorm relieved the drought.
- Jacobus de Voragine, The Golden Legend, translated by William Granger Ryan, Princeton University Press, 2012: 427.

This feast is celebrated on August 3 in the medieval calendars. 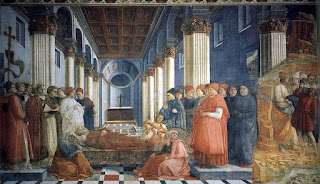 
The legend of Saint Stephen's relics was widely known in the Middle Ages, also in medieval Norway. But it seems that the form in which it was known is something of a mystery, at least if we are to judge from a letter sent by Pope Alexander to Archbishop Eystein Erlendsson, most likely in the 1160s. Alexander's letter touches on several questions that Eystein has sent him in a letter that is now either lost or forgotten in the Vatican libraries. One of the questions from Eystein concerns a legend of Saint Stephen, and Alexander replies as follows:

On the legend of the invention of blessed martyr Stephen, in the manner in which it belongs to you [Norwegians] we have not seen it, and we can [accordingly] neither approve nor disapprove of it according to the law. But we know that concerning this, that which is written about the vision of Lucian the priest is that which is read in the Roman Church.
- Eirik Vandvik, Latinske dokument til norsk historie, Det norske samlaget, 1959: 68 (my translation)

In other words, it seems that there existed a Norwegian version of the legend that is now lost, and it is impossible for us - as it was for Pope Alexander III - to say anything about how it differs from the legend as it was read in the Church. That there was a significant difference - however minute - is evident from the fact that Eystein found it necessary to ask specifically about it in a letter to the pope. Eystein was a well educated man, and is believed to have received his education at the monastery of Saint Victor in Paris. He had also been a royal chaplain at Konghelle (Kungälv in modern Sweden) before becoming an archbishop, so he was well familiar with the ecclesiastical rites, and therefore must have been well familiar with the official version of the invention Stephani. 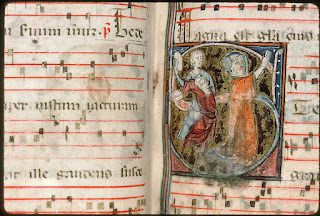 
I encountered this detail during my research on the cult of Saint Olaf for one of my thesis chapters, and it eventually dawned on me why this matter was so important to Archbishop Eystein. The finding of Saint Stephen is, as mentioned, celebrated on August 3, and this day is also hugely important for the archbishopric of Nidaros for one particular reason, namely the feast of the translatio of Saint Olaf, the patron saint of Norway whose bones were kept in the Nidaros Cathedral.

Olaf Haraldsson returned to Norway in 1030, trying to regain the kingdom of Norway which was then under Danish overlordship. The armies met at Stiklestad north of Trondheim and Olaf was killed on July 29. The year after, on August 03 1031, the body of Olaf was exhumed under the auspices of Bishop Grimkell, whom Olaf had brought to Norway as bishop of Nidaros. This was when Nidaros was a bishopric under the Hamburg-Bremen archdiocese. Olaf's body had been buried along the shore of the river Nid which flows through Trondheim after the battle, and was now placed in the Church of Saint Clement, which appears to have been found recently. The exhumation followed reports of miracles occurring at the site of Olaf's burial, and the translation of the body was in effect a pronouncement of sainthood, i.e. a canonization. 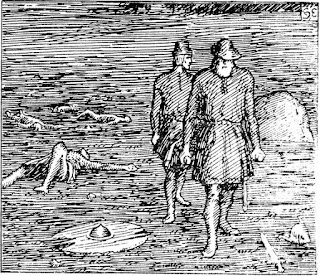 The clearest example of Olaf and Stephen being connected can be seen not only in the liturgy, but also in the fact that one of the oldest chapels of the new cathedral was dedicated jointly to Olaf and Stephen. We don't know the exact date of when the chapel was consecrated, but historian Øystein Ekroll points out that it was likely done in the course of the 1160s, with 1161 as a terminus post quem since this year the first chapel - situated just below the other one - was consecreated by Eystein.

Olaf is typologically connected to Stephen by virtue of him being the protomartyr of Norway. This is a theme that Theodoricus Monachus picks up in his chronicle Historia antiquitate Regum Norwagiensum, written around 1180. Here we read explicitly that Olaf followed the example of Stephen when dying in battle at Stiklestad. For reasons that are not clear, this image is not picked up in the later hagiograhy Passio Olavi which draws important material from Historia antiquitate. It was in other words, a well and widely known connection between Olaf and Stephen in medieval Norway. Grimkell sprinkles the body of Saint Olaf
Detail from an altar front from Trondheim, c.1320


The connection between Olaf and Stephen are only found clearly expressed in twelfth-century sources, but the tantalizing question is: Was this connection known or present before the twelfth century? For instance, could it have been the deliberate choice of Bishop Grimkell to have Olaf's relics exhumed on the very day celebrated for the finding of Stephen's relics? And if so, could this had had an impact on the legend of inventio Stephani in medieval Norway? We do know that such a legend existed, but we don't know in what form, and we do not know whether it connects to Olaf in any way. But given the fact that they are both celebrated on the same day for the finding or movement of relics, it is tempting to think that there might have been a connection between them expressed in the now lost Norwegian legend concerning the finding of Stephen's relics. Of course, it is meaningless and fruitless to make any guesswork beyond this point, but it is at least an attractive idea.

Carols on the lapidation

The possible finding of the Church of Saint Clement in Trondheim

Saint Olaf and the literature of Nidaros archbishopric

Theodoricus Monk and the European tradition