The Ascension in Bellinge

Today is the feast of the Ascension, which commemorates Christ's departure from the disciples after the Resurrection. It was an important feast in the cycle of liturgical celebrations known as the temporale, i.e. the movable feasts that celebrated events in the life of Christ. The Ascension is attested to in the gospels and in the Acts of the Apostles, but with varying details. Moreover, additional details in the narrative accrued in the centuries following the time of Christ, as can be seen in the rendition of the Ascension from Bellinge Church on Fyn in Denmark. 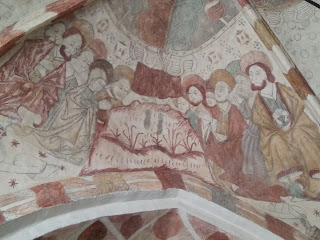 Bellinge Church as it stands today is mostly a late-medieval structure, although elements of the Romanesque style points to an older structure. In 1496, the interior of the church was decorated with scenes from the Bible, as well as some saint stores (most notably the legend of Saint George, which will hopefully be the subject of a future blogpost). These wall-paintings were executed by Ebbe Olesen and Simen Petersen, two Danish painters, and it is thanks to an inscription incorporated into the wall-painting programme that we know it was finished in 1496.

The Ascension is depicted on the second of the three vaults of the nave, and is visible when standing with your back against the choir. The scene depicts Christ being taken up into a cloud, as recounted in the gospels and in Acts, with only the lower parts of the kirtle and his bare feet showing. The Virgin Mary and the disciples surround the place from which he was taken up. 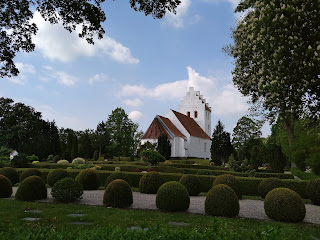 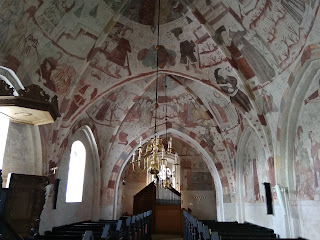 As with several episodes from the Bible, further details were added to the Ascension narrative as Christianity developed and spread. One such detail came into place relatively early, namely that when Christ ascended into Heaven, his feet left an imprint on the stone on which he had stood. This belief led to the building of a chapel on this site at a relatively early date, and it became part of the story that was told to the new converts to Christianity. The detail of Christ's footprints can be seen quite prominently in the heavily-restored wall-paintings of Bellinge, as two black sole marks are shown beneath Christ's rising feet. It is yet another example of how apocryphal details that are not mentioned in the Bible came to be accepted as historical truth, and thus shaped the way the narratives of Scripture were rendered in text and image. 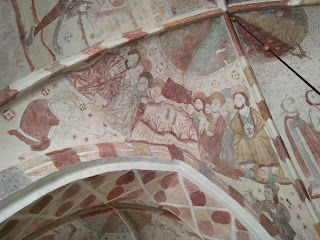