Today is the feast of Saint Olaf of Norway, who died at the Battle of Stiklestad in 1030, in an attempt to regain control of the Norwegian kingship. In the following year, Olaf's remains were translated from their first place of burial to a shrine in the Church of Saint Clement in Trondheim. (A church that is believed to have been found in a recent archaeological dig.) 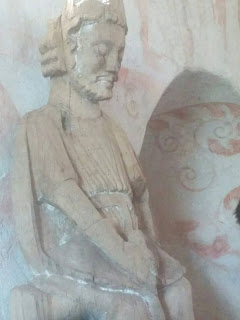 
The life of the historical Olaf, as well as the history of his posthumous cult, have been the subject of much scholarship in the past century, and because Olaf was a saint venerated throughout the North-Atlantic and the Baltic culture-spaces this is a very rich material for academic discussion. One aspect that often comes up when talking about Saint Olaf is how we should understand the events of August 3, 1031. Very often, one will see that this is talked about as a canonisation, which is the typical term for describing when someone is proclaimed a saint in the later Middle Ages, as well as in the modern period. In this blogpost, however, I aim to explain as well as I can why this term is not accurate, and does not provide a good understanding of what happened that day in August almost a thousand years ago. 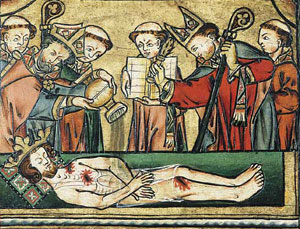 Olaf is prepared for the translation
Detail from an altar front from an unknown church, Trondheim, c.1330-40
(Courtesy of Wikimedia)


The translation of Olaf's relics was initiated and supervised by Grimkell, the bishop of Trondheim who had come to Norway in Olaf's retinue, and a man likely of Anglo-Norse background and well-versed in the cult of saints. Following Olaf's death on Stiklestad July 29, the body was interred unceremoniously and in secret, according to the account in Snorri Sturlusson's Heimskringla from c.1230 (it is not mentioned in Olaf's saint-biography, now known by the title Passio et Miracula Beati Olavi, which was finalized in the early 1180s). Following reports of miracles, the bishop interpreted these as signs that God was proclaiming the holiness of the would-be king. Olaf was exhumed and enshrined, which consisted of a translatio, a moving of the relics of a holy person to a new resting place. The feast was eventually also included in the liturgy for the Norwegian archdiocese, but we do not know exactly when this happened. The cult of Saint Olaf was thus established.

On August 3 1031, Bishop Grimkell of Trondheim proclaimed to the people that Olaf was a saint of God and demonstrated this by moving his relics to a shrine where those relics could be venerated. The question then remains: Should we call this a canonisation? The simple answer is no, and I will try and explain why this is the case, and why the terminology matters.

First of all, a canonisation means to inscribe the name on a list, a canon, which thus makes the status of this name official. Such a list of saints - be it physical or just an abstraction - became part of the later medieval papacy's system of ensuring orthodoxy in Latin Christendom. In the context of the cult of saints, the term itself, canonisation, means to be formally acknowledged as a saint by the papal authority.

The problem with using the term "canonisation" for the proclamation of Olaf's sainthood in Trondheim in 1031, is that Olaf was never formally acknowledged by the pope, and neither did he have to be. By the early eleventh century, the proclamation of sainthood was left to the authority of bishops. In the more developed church organisations, as we see in Germany, France, England, Spain, a proclamation of sainthood was often done following a synod of several bishops, to ensure that the proclamation was valid. Certainly, the verb "canonizare" had existed in Latin since at least the tenth century, but it was not widely used, and it was not the terminology that accurately described a synodal confirmation of someone's sainthood. The reason why the proclamation of sainthood was an episcopal matter had to do with the limitations of the papal church at the time: In the first half of the eleventh century, the pope's authority was mainly local, and while he was acknowledged as the head of the entire Latin church, he did not have the administrative infrastructure to control the cult of saints throughout the expanding Latin Christendom. The declaration of sainthood, therefore, was an episcopal responsibility. Moreover, since the Norwegian church organisation by 1031 was still very much in its infancy, the authority of Grimkell as bishop of Trondheim was sufficient for establishing the sanctity of Olaf. When canonisation became a mechanism of control for the papacy in the twelfth and thirteenth centuries, this did not work retroactively, and was only used for new cults. Every person that was already venerated as a saint was allowed veneration - unless it was a controversial case.

The question then is: Why does it matter whether we use the term "canonisation" to talk about the moving of Olaf's relics in 1031. First of all, this is simply a matter of precision. While the term "canonizare" did exist in 1031 and is therefore not anachronistic, it was not widely used and it is very unlikely that Grimkell himself thought in such terms. Secondly, the term "canonisation" implies a stronger contact between the nascent diocese of Trondheim and the papal see than was in place by 1031. To call the translation of what was essentially a local saint a canonisation is to vastly overplay the importance of Olaf in the Latin cult of saints. Even though Olaf became immensely popular throughout Northern Europe, this success came in stages and was not directly due to the ceremony of August 3 in Trondheim. In this way, to say that Olaf was canonised is to imply that there were people in Rome, in the minuscule papal administration, that knew anything about the recently-dead Norwegian would-be king. There were other mechanisms by which the cult of Olaf gained popularity, and the term canonisation tends to overshadow those mechanisms.

Olaf was, in other words, not canonised. His relics were translated, and by this translation he was proclaimed to be a saint, who could intercede for those who venerated him and who had merited a shrine in the church and a liturgical feast. This was established through episcopal authority, the highest authority needed for these affairs in the 1030s, be it in Norway, in Germany, in Spain, or any other part of Latin Christendom.