A medieval view of Växjö

Yesterday I walked into town for the first time in several weeks, and I had selected a route which I had not travelled before. It turned out to be a very rewarding choice, as the road took me to the top of a hill sloping down into the centre, as it cut through an allotment. This angle gave me a lovely view of Växjö cathedral, and it struck me as a notably medieval view, because from this perspective there were no tall houses to rival the height of the cathedral or to obscure its spires, there was no industrial or mercantile complex to remind me of the present times. 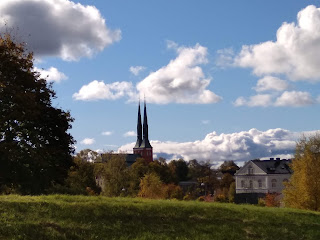 I call this view medieval, not because there were no modern components in the vista. After all, the cathedral itself is to a large extent an early modern renovation of the medieval structure, remnants of which can still be found inside and around the church. Yet at the same time, this view - with the cathedral clearly outlined against the sky, dominating the horizon and foregrounded by patch of cultivated greensward - would have been essentially the same as the view of medieval churchgoers wending their way down the slope in the Middle Ages, when Växjö was the frontier zone between medieval Sweden and medieval Denmark, and when the bishops of the city claimed to preside over the oldest of all the Swedish dioceses (a claim still made).

There was something lovely and peaceful in the stability and permanence offered by this view. And even though that stability and that permanence are belied by the very features that make up the view, it is enough to give a calming sense that while the individual pieces might have changed significantly in the past thousand years, a lot of it still remains the same, and this allows us to get a better sense of how this landscape was experienced by its inhabitants several centuries ago. There is something to be said for that kind of sensations.