Today is the feast of Saint Edmund Martyr, the king of East Anglia who was killed by Danish Vikings in 869, and who became one of the most important native saints of medieval England. This year's feast is, moreover, a special occasion, as it is the millennial anniversary of the founding of the monastic community at Edmund's shrine in the town that came to be Bury St Edmunds, and which is referred to in Edmund's saint-biography by Abbo of Fleury from c.987 as Bedricurtis, or Bedricsworth. The shrine of Edmund had been established shortly after his death, although the actual historical circumstances were in all likelihood very different from how they are depicted in Abbo's Passio Eadmundi. What we do know, however, is that Edmund's shrine was the centre of a local cult for most of the tenth century, but one that attracted the veneration of several magnates and bishops and was a significant feature in the religious life of East Anglia. Based on the miracle stories included in Passio Eadmundi, this shrine was maintained by priests and recluse women, and it had amassed a trove of wealth that was sufficiently large to attract the attention of a group of thieves. So while it was not a monastic community, it certainly had both monastic elements and a great status - which is probably why the shrine was selected to be reformed as a Benedictine abbey.

The reformation of the community took place under the auspices of King Knud I of England, Denmark and Norway. Knud was an active patron of religious houses in England, and Bury St Edmunds was one of several to which he turned his attention. However, the Danish background of the king must have been particularly poignant aspect of Knud's patronage of Bury, as his father, Svend Forkbeard, had died only six years prior during his invasion of Denmark, and according to the local legends it was Saint Edmund himself who had killed the Danish king for having exacted a heavy tribute from Edmund's shrine. This episode became one of the most iconic scenes to be depicted in pictorial renditions of Edmund's legend.

In its first few decades, the change to a monastic community at Bury is likely to have been important, but not necessarily dramatic beyond the introduction of a monastic liturgical use, which was more elaborate than the one that was performed previously - although we do not know anything about the details of that liturgy. In the second half of the eleventh century, however, Bury became a major cult centre that established connections with other religious houses on the continent, and that actively promoted and disseminated Edmund's cult beyond its own territory. The man in charge of this dissemination programme was Abbot Baldwin, a former monk at Saint-Denis who had been the physician of Edward the Confessor, and who was appointed by the king to the abbacy. During Baldwin's reign, Bury was the location of a significant textual production, which included the copying of books as well as the composition of new material. Arguably, the most important of the new productions was the liturgical office, because it was through this medium that the abbey formulated its own relationship to its patron saints, and formulated its own identity through its presentation of the life and history of that patron. This identity - this blend of history and iconography - was taught to the monks of Bury through the annual celebrations of Edmund's feast day, November 20, and through this communal, immersive performance the community reminded itself of its role in the holy scheme of God, of the merits of its patron, and of the place of Bury St Edmunds in the fabric of Creation. This kind of identity-construction and identity-perpetuation was a key element of liturgy, and one of the reasons why a new monastic office was composed under the auspices of Abbot Baldwin. It is perfectly possible that another monastic office existed prior to Baldwin's abbacy, but I for my part find it unlikely.

The office for Saint Edmund is of great interest to us, not only because of its key position in the cult of Edmund and the life and identity of the abbey, but because it has come down to us in one of the oldest surviving sources from Bury: A manuscript dated to around 1070, København Kongelige Bibliotek GKS 1588, in which an almost-complete version of the office can be found, along with the earliest known copy of Passio Eadmundi. For the millenary of the abbey of Bury St Edmunds, I here present a little selection of the content of this office. The translations are based transcriptions and translations from my PhD thesis. A modern arrangement of the office of Saint Edmund can be found here. 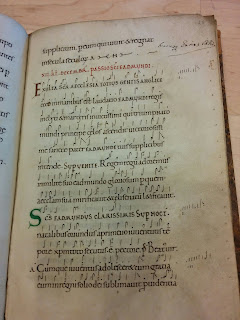 The first song of the office as it has come down to us from MS GKS 1588 is the Magnificat antiphon, performed in conjunction with a psalm during the hour of Vesper. In this chant, Bury's identity vis-à-vis its wider geography, as the chant asks the church of the entire English people - i.e. not only the local branch of East Anglia - to celebrate Saint Edmund. This imparts the idea that Edmund is of so great a standing in the senate of God - a typical metaphor for Heaven - that he can intercede for all the English people, not just those of his own community at Bury.

Rejoice, holy church of the entire English people, behold in [whose] hands is Edmund praised, the illustrious king and invincible martyr, who triumphing over the prince of the world ascended victoriously in heaven. Holy father Edmund, hold out your prayers 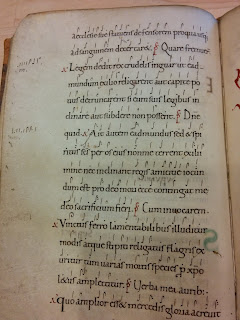 The next chant I want to emphasise is third antiphon of Matins. The hour of Matins was the climax of the liturgical celebration of the feast day. This was the longest of the eight services of the daily round, and it was here that the community shared in the story of their patron to chants and readings. The chants of the office were chanted by all the monks, and chants are thus an immensely powerful vehicle of identity construction since the singing makes each individual monk of the community take part in the perpetuation of the institution's collective memory.

This antiphon, Legem dedit, is of particular interest because it adds a new element to the iconography of Saint Edmund. It introduces the idea that the Danish chieftain, Hingwar, threatened Edmund with exile lest he submit to him. The invocation of exile is not mentioned in Passio Eadmundi, but it is a signficant addition in the liturgy, because even though the legend does include an exile for Edmund, the mere threat invokes the image of the exile, and the archetype of exiles for all saints was Christ, who had gone into exile as a child to escape the slaughter by Herod. Since the efficaciousness of saints was often measured in the extent to which they imitated Christ, an added element of this imitation, the threat of exile, served to impress upon the community at Bury how Christlike was their patron.

The cruel king Hingwar gave the condition / so that Edmund would be banished into exile / or else decapitated, if he could not / bend to his laws and place himself under them 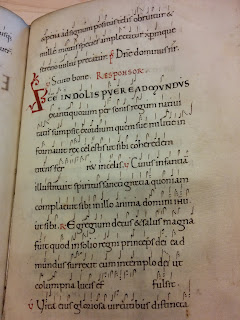 København Kongelige Bibliotek GKS 1588, f.29r
The final example for this millenary blogpost is the first responsory of the office, also performed during Matins. A responsory is a chant sung after a lesson, and it is comprised of three parts: The main part which is the responsum (literally, the response, as it responds to the lesson), then comes the verse, v, and then finally the repetenda, r, which repeats the last line of the responsum for emphasis.

The first responsory comes after the first lesson, in which we learn about Edmund's characteristics and his merits as a king and saint. The responsory emphasises that Edmund was pre-destined to become a saint, and that his entire life was planned by God so that Edmund would join him in Heaven as one of his soldiers in the fight against the devil. This pre-ordained destiny was typical of all saints and not unique to Edmund, but it was nonetheless an important trait, and by repeating this aspect of Edmund twice in the same chant, the community at Bury were reminded, and reminded themselves, that their patron was one of the elect of God, and could therefore aid them in their needs. Such a comfort, the idea of a patron who was especially beloved by God, should be understood as a crucial aspect of a cult centre's identity construction.

With inborn holiness, the boy Edmund, born from old royal lineage, was taken from the beginning, whom the heavenly king shaped [into] his soldier so that as His coinheritor He could transfer him to heaven.
[v] Whose childhood shone with the gifts of the Holy Spirit, since it was acceptable to him in this soul
[r] so that


The examples I have pointed to here are only three of many. The office is of course a unit in the sense that it conveys a unified legend in a short space of time, but it is also comprised of episodes in which particular aspects of the saint, the saint's qualities and the institution's identity are given particular attention. The full scope of the programme of identity construction begun under Abbot Baldwin requires an immersion in the entire office, not just its texts but its texts performed with music, but even by these few examples we manage to see some of the key aspects of this identity-construction.