Souls of thy father's house - Doeg the Edomite 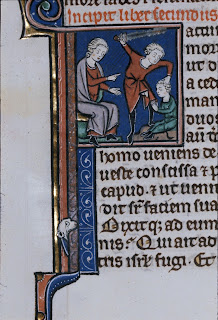 The beheading of priests, MS. Royal 1 D I, English Bible 3rd quarter of the 13th century
Courtesy of British Library


In the Bible and in much of medieval hagiography there are numerous notable deaths by beheading. St. John the Baptist - who to my knowledge is never depicted as anything but a man of whole body - is of course the most famous example. However, the most vividly depicted beheadings in medieval iconography are most frequently found in hagiography. Saint Dionysus, or St. Denys, was for instance beheaded along with his companions Rusticus and Eleutherius, and later legends even claimed that he, upon losing his head, picked it up and walked to the place where he wanted to be buried, which naturally is the site of the famous Abbey dedicated to his honour. There are other saints like this, such as St. Nicasius of Rheims who, according to the Legenda Aurea is reported to have continued reciting a psalm after the top of his head was chopped off. Modern scholarship has invented the term cephalophore for saints who carry their own heads, and the motif is said to be of a Celtic origin. The talking head features also in the martyrdom of St. Edmund, whose iconic shout for help, "her, her", became a well-known element of English folklore. 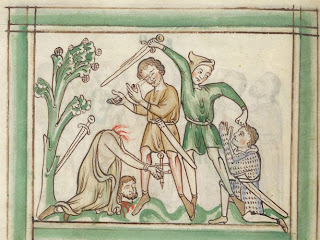 
These saints listed here are all protagonist victims whose death are imitations of Christ's passion at the hands of humanity, martyrs who confess their faith in God as blood-witnesses. In the Old Testament, more specifically in the 1st Book of Samuel, there are also victims who, if not protagonists, at least sides with the protagonist, namely the priests of Israel during the reign of Saul.

The story is recounted in 1. Samuel 21-22, where Saul and David are at war with each other, and Saul accuses the priests for being on the side of David for failing to tell Saul of his escape. For this he commands of Doeg the Edomite: Turn thou, and fall upon the priests. Doeg obeys his orders and fell upon the priests and slew in that day eighty-five men, performing his misdeed with the very sword with which David earlier had beheaded the giant Goliath. After killing 85 priests he turns to the city of Nobe, which was the city of priests, and smote [it] with the edge of his sword, both men and women, children, and sucklings, and ox and ass, and sheep with the edge of the sword (1. Samuel 22:19). 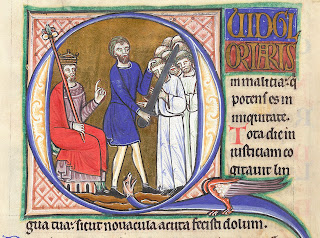 It is a chilling tale of tyrannical trespass, adding to Saul's long list of misdeeds, but to my knowledge it is seldom depicted in medieval art (though I may be corrected on this). However, the above image is quite a treasure, originating as it does from the wonderful scriptorium of St. Albans, and - like the introductory illumination - it is an image and a motif well worth sharing and a story well worth reading.