Research into medieval history often opens up strange and unexpected pathways, and many of these pathways lead into the modern world, highlighting the unbroken continuity of time and disabusing us of the insufficiencies of periodisation. As a medievalist, I enjoy exploring these various ways in which any given research topic also has a reception history that yields knowledge about a time much closer to my own than that of the individuals and institutions of my research. One such case that delighted me this week was that of two voyages centuries apart, the legendary voyage of Saint Olaf, king of Norway (d.1030), and the historic voyage of Lev Trotsky in 1917. 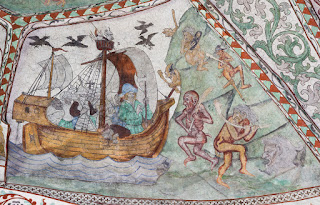 
The voyage of Saint Olaf is an episode in the corpus of stories told about the saint-king throughout medieval Northern Europe. According to the various accounts, Olaf races his half-brother Harald Hardråde (d.1066) in a ship, and it became a popular theme of church art in late-medieval Sweden, as seen in the example by Albertus Pictor above. The roots of this story might lie in Olaf's return to Norway in 1016 to claim the Norwegian kingship, after having spent years as a mercenary in Normandy and England. But this possible kernel of historical truth became a fantastical tale that was expanded by various villages which claimed that Saint Olaf's voyage had passed through the area.

But what does this have to do with Lev Trotsky? In March 1917, Trotsky had left New York where he had been living for a period of time, and began to make his way back to Europe on a Norwegian steamer. Trotsky was a person of interest to the American and British intelligence services, and was detained in Halifax for a short while, but he was eventually allowed to continue his voyage. The ship that had brought Trotsky from New York to Halifax was SS Kristianiafjord, one of the steamers of the Scandinavian-American line that connected Europe and America, but since this crossing had been interrupted Trotsky had to find a new ship. This ship is what connects him with Saint Olaf, because the steamer on which he travelled from Halifax to Oslo was SS Hellig Olav, named after the man whose legendary voyage to Norway had such a tremendous impact on the cultural history of Scandinavia. So they travelled, Olaf and Lev Trotsky, each in their own vessel, centuries apart.

Now, you may ask what we are to do with this information, how can this contribute to a greater understanding of either Saint Olaf or Lev Trotsky. The simple answer is that this information is of very little consequence to our understanding of either. This is an amusing coincidence that does not yield any information beyond itself. However, the fact that a steamer was named after Olaf is an example of the reception history of the saint-king into the modern era, and gives us at least a somewhat more nuanced understanding of how the myriad ways in which Saint Olaf has set his mark on Norwegian culture. 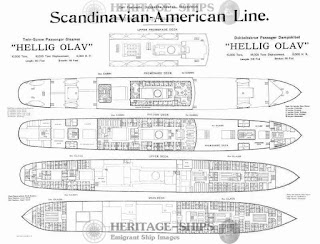