For the feast of Saint Sigfrid

Today is the feast of Saint Sigfrid of Växjö in Sweden, the patron saint of the city and of the region of Småland. His legend survives in thirteenth-century sources, and according to this legend he was the archbishop of York in the early eleventh century, who went to Sweden on the invitation of the pagan Swedish king who wanted to learn about Christianity. This king was Olof Skötkonung (d.c.1022), who is the first recorded individual to have claimed rulership over both the Geats and the Swedes, which were the two main political entities of medieval Sweden.Olof Skötkonung (interpreted as tax-king) is a historical figure, but Sigfrid's historicity is highly dubious. We do know that there has never been an archbishop of York by that name, and the English king Mildrith who also appears in the legend is likewise not authentic. 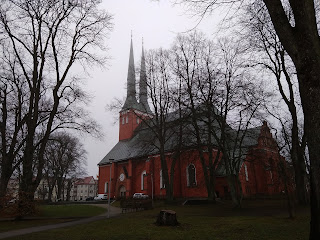 
The legend of Sigfrid continues with a description of his arrival in Denmark, where he was greeted by King Svend (presumably Svend Forkbeard who died in 1014). The Danish king was himself a Christian, and had Sigfrid escorted safely to the Swedish border. By this point in time, Denmark extended into the region of Skåne, or Scania, which today belongs to Sweden. Consequently, at Sigfrid's time, it was Småland that constituted the border zone between the politically fragmented Sweden and the more centralised Denmark.

In Småland, Sigfrid set up camp by Lake Växjö, a name that I have seen interpreted as veg-sjö, or road-lake, i.e. a lake by the crossroads. If correct, this name points to the existing trade routes through forests and by water that were in place at the time of Sigfrid's alleged arrival. This also makes sense, considering that Christian missionaries - historical or mythical - were not pioneers in unknown lands, but settled where there already existed networks of human contact and infrastructures by which the new faith could be disseminated. Close to Lake Växjö, he established his first church, said to be on the spot where the cathedral stands today. While Sigfrid's church is mythical, it is likely that a wooden church was erected in the early stages of the Christianisation of the area. It is also likely that this wooden church was placed where the cathedral stands today, because when Växjö became a bishopric in 1170, the building of a new stone church was started. This stone church were a replacement for the previous wooden structure, and likely raised on the same foundations - this is a very common pattern in the history of Nordic churches.

In the first stages of Sigfrid's missionary campaign, he was aided by his three nephews that he had brought with him from England. They were named Unaman, Sunaman and Vinaman, and they were in charge of the nascent church while Sigfrid went to visit King Olof to tell him about his progress. While Sigfrid was away, a group of twelve local aristocrats - i.e. rich farmers and chieftains - conspired against the three nephews. These twelve had been selected as honorary members of the church organisation, presumably in imitation of Christ's apostles, and possibly also with a nod to the twelve monks that were chosen by Benedict of Nursia in his establishment of the Benedictine Order. The twelve Swedes, eventually, stole into the sleeping quarters of the nephews and decapitated them. The bodies were buried and the heads thrown into Lake Växjö.

When Sigfrid learned about this, he returned to Växjö and as he was walking by the lake a celestial light shone down on the water, revealing the three heads placed in a small wooden tub. The heads spoke to him, and vowed revenge on later generations. The culpits were later punished by Olof Skötkonung, and Sigfrid continued his work as the first bishop of Sweden. He later died peacefully, and is therefore listed as a confessor in the calendars. Since today is the feast of Sigfrid, there was a concert in the cathedral featuring excerpts from the liturgical office, which survives in thirteenth-century sources. The arrangement was organised by Karin S. Lagergren, a friend and colleague at Linnaeus University whose research is the foundation for the musical arrangement, and the recording of a CD of Sigfrid's liturgy. It was a wonderful experience with beautiful music permeating the sacred space of the cathedral and bringing to life the mythical and inauthentic figures, whose story nonetheless is likely based on some collective memory from the time of conversion. This office was likely composed in the bishopric of Växjö - thus pointing to the existence of a scriptorium at the cathedral - and from there it was disseminated throughout the Swedish metropolitan see (which had been established in 1164). The performance, in this way, brought me closer to how the story of Sigfrid, and how the identity of the cathedral, was communicated to the medieval community of clerics from the thirteenth century onwards. 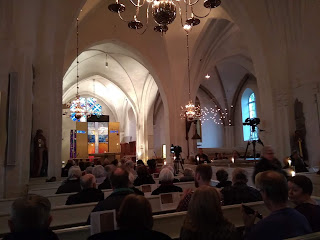 Following the concert, I had a stroll by Lake Växjö, following the shore where Sigfrid mourned his nephews and miraculously found their heads. There was no celestial light today, but it was nonetheless a very atmospheric afternoon, and with my head filled with the watery imagery of the Sigfrid legend, it became somewhat easier to imagine the scenes of the story. It was, in other words, easy to see how the legend and the landscape in combination served to solidify an identity centred on the figure of Sigfrid. We now know that he never existed, but to the Swedes in the twelfth century onwards he was, and he became the representative of their identity both in relation to the local geography and in relation to the Swedish history as a whole. 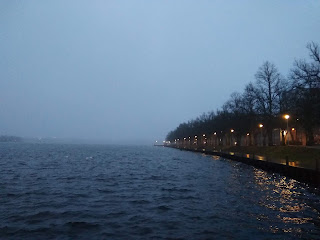 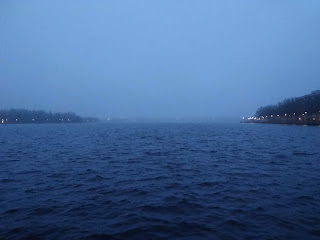 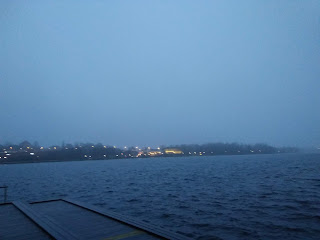