Working with liturgical fragments, part 16 - the clue is in the notation

I am currently reading articles dealing with some of the few but valuable medieval fragments that have survived from the twelfth and thirteenth centuries in Norway. For a place like Norway where the original wealth of medieval manuscript material has mostly been reduced to fragments, with some few manuscripts surviving more or less completely, the remaining fragments are all the more important for extracting as much evidence as possible. In the case of Norway, 6000 known fragments from about 1000 books survive (see Ommundsen 2010), and several of these have been the subject of recent studies. Some are even available online at the University of Bergen's fragment project website: https://fragment.uib.no/.

In Denmark the situation is somewhat different, as the number of both fragments and manuscripts is higher, although I do not know of any estimates of this number as of now. New fragments with a connection to medieval Denmark continue to come to light, and I was reminded of one such fragment whose Danish provenance has recently been hypothesised by a colleague and myself (see Holck and Hope 2019). The fragment in question is one which I have mentioned in two previous blogposts (here and here), namely Syddansk Universitetsbibliotek RARA L 31, an edition of Epistolarum Astronomicarum by Tyco Brahe. 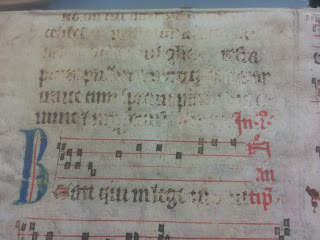 
As I was reading about the Norwegian fragments, I was reminded of how musical notation can provide excellent clues in the extraction of evidence from liturgical material. This has been described in a particularly excellent way by Gisela Attinger regarding one case where the study of notation enabled to connect several Norwegian fragments to one and the same scribe (see Attinger 2010). 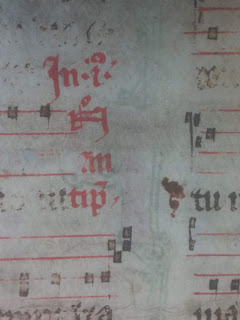 
On a lower scale, musical notation has also been important in the work on RARA L 31 by Jakob Povl Holck and myself. While most of our attention has been focussed on the cover fragment with its magnificent initials and well-preserved text and notation, this is not the only fragment contained in the fragment carrier. In addition to the cover, the bookbinder has also made use of smaller strips of parchment to strengthen the spine, which is a very common occurrence. Only one of these spine fragments is visible, but it is certain that other fragments like it were used to strengthen the rest of the spine as well. 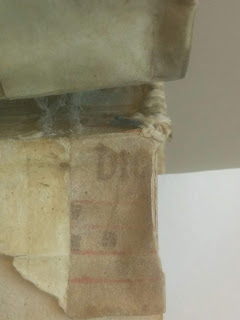 
Owing to the size of the fragment and the limited amount of text, we have not been able to provide any hypothesis about its original manuscript context, other than its square notation. This square notation is an important step, as it shows that the fragment is most likely not of Germany provenance, but rather of either Scandinavian, English or (perhaps less likely) French provenance. Beyond this, however, it is unlikely that we will be able to much with any degree of certainty.

However, one question does present itself, and this question is important for understanding the book as a fragment carrier as well as the individual fragments. This question is whether the two fragments are from the same manuscript, or whether they belong to two separate manuscripts. Did the bookbinder cut strips for the strengthening of the spine and remove one folio to use as the books cover from one and the same liturgical manuscript?

First of all, there is the notable difference in colour. However, this gives us nothing, as discoloration over time is bound to occur differently in a fragment hidden in the spine and a fragment exposed to light.

Secondly, it appears that the fragments come from books of different sizes. The cover fragment is 40x30 cm, and the folios of the original manuscripts would therefore be quite sizable and well-suited to be recycled as book covers. To cut such a voluminous folio into smaller strips for the strengthening of the spine is unlikely, as it would be rather wasteful. It is more difficult to assess the size of the spine fragment, but it does appear to come from a smaller book. The size, however, is not a conclusive piece of evidence, as the spine fragment could have been cut to serve as a spine-strengthener, unlikely though such a scenario might be.

A third clue can be found in the letters of the respective fragments. This, however, is complicated by the fact that we have so few letters from the spine fragment with which to compare. Only the letters D and I can be securely identified, whereas the third letter could be either C, E, D or even O. This means that we can only compare with the Ds and the Is of the cover fragment. Such a comparison seems to strengthen the hypothesis that the two fragments belong to different manuscripts, but this is also not conclusive.

We must therefore turn to the notation, and it is here we find evidence that suggest quite definitely that we are here dealing with two separate fragments. In the case of the cover fragment, we can note - pun intended - that the scribe has a tendency to write the squares of his notation with an upward rounded spike in the top right corner. This might be due to the pen, or it might be because of a movement in the scribe's hand that finishes the making of the square. Whether it is the movement, the pen, or some other factor, we see that this is a feature that recurs in almost every note of the fragment. As we do not have any other works by this scribe with which compare, we cannot definitely say that this feature can be regarded as one of the scribe's hallmark - and most scribes had such hallmarks - but it is very likely.

Regardless of whether or not the upward spike is a hallmark of the scribe of the cover fragment, it si a feature that is likely to have been found throughout the entire original manuscript. What do we see, however, when we compare with the squares of the spine fragment? Here, we only have a handful of notes, three of which can be seen below. While this is not a high number of comparative material, it is enough to establish that the squares of the spine fragment have even sides, and although they are not perfectly flat, they do not have an upward spike in the top right corner. This suggests in the strongest terms that the two fragments are from two separate manuscripts. 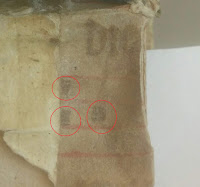 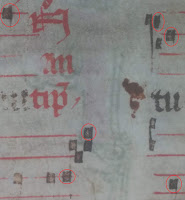