I'm currently neck-deep in PhD proposals and TA work and I'm currently nearing the end of the first of two hellishly busy weeks. In order to keep the posting frequency at the established four-times-a-month minimum, here's a poem I wrote back in November. The poem is based on Parmigianino's (1503-40) Madonna and Child with angels, most commonly known as Madonna dal collo lungo, Our Lady of the long neck. It was painted in the period 1534-40. The picture is taken from Wikimedia. 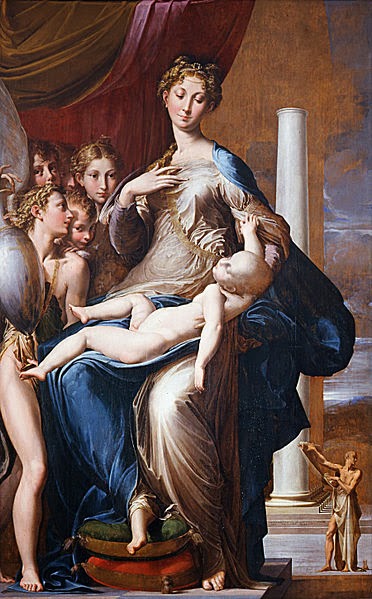 A dead child fresh-looted from the earth
or else a dummy clumsily arranged
across her lap, fixed in a posture strange
to living flesh proclaims the deathless truth
of God the man who set frail mankind's worth
above His sparrows. How little we have changed
since first His form set foot in street and grange
of Galilee to heal the human pith.
That wound is bleeding still, but by His words
we may yet find a way from out our deep,
weak as we are, prey in the beak of birds,
hostage to oaths we break and oaths we keep,
myopic striders lost within the herd,
idolaters denying our children sleep
- November 09 2013

Synge on the Aran 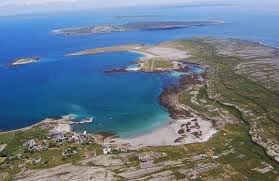 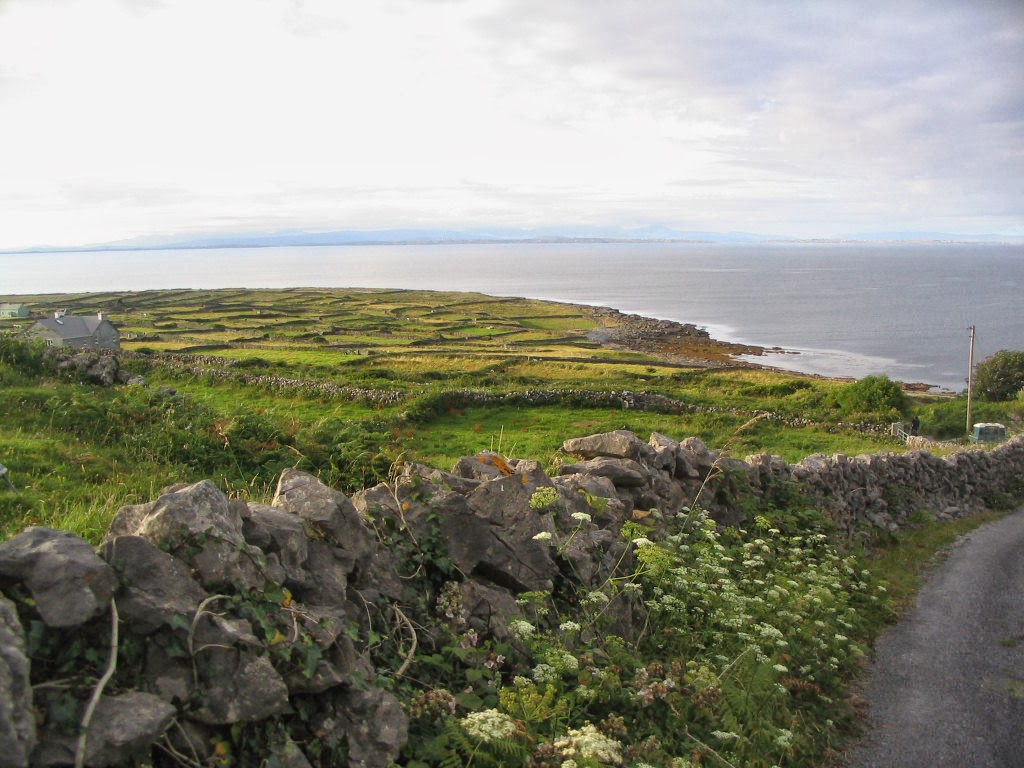 The Aran coastline
Courtesy of Wikimedia
Synge on the Aran

Salt off the sea whets
the blades of four winds.
They peel acres of locked rock,
pare down a rind of shrivelled ground;
bull-noses are chiselled on cliffs.

Islanders too are for sculpting.
Note the pointed scowl,
the mouth carved as upturned anchor
and the polished head full of drownings.

There he comes now,
a hard pen scraping in his head;
the nib filed on salt wind
and dipped in the keening sea. 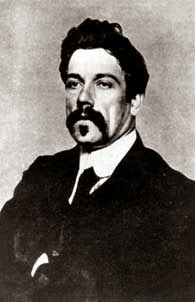 A carol for Saint George

A short while ago I borrowed Greene's book of The Early English Carols (Clarendon Press, 1977), a treasure trove of Middle English lyrics from the later Middle Ages. I was particularly glad to see a small section of carols dedicated to saints, and I found one dedicated to Saint George which I would like to share.

The carol in question is found in British Museum MS. Egerton 3307 and dates to the 15th century. It could be regarded as a war carol, or at least a carol with a strongly bellicose undertone, as it invokes the legendary account of St George hovering over the field at Agincourt and displaying his banner in support of the English. Greene himself puts forth that the reference to a chronicle - the crownecle ye red - suggests a monastic origin for this carol, since a monastery is "the sort of place where a chronicle would be kept and read" (Greene 1977: 419). An alternate understanding of this line, however, is that it is a play on a beloved line often repeated in romances, where the fictitious nature of the story is underlined by "in romance as we rede". In this carol, however, the miraculous appearance of Saint George is not fictitious, at least to the medieval mind, and can therefore be found in a chronicle rather than in a romance.

By the 15th century, St George had been appointed as patron saint of England, and in the course of the Hundred Years War, he was woven into the fabric of English self-representation and became, for all intents and purposes, an English saint - at least to the English mind. He was at the same time an important figure in Italy - as evidenced by the prevalence of the St George motif in Italian Renaissance art - and also in France. I have taken the illustrations for this blogpost from French manuscripts, as a rather snarky nod to the notion that George had a particular fondness for the English during the Hundred Years War.

For more on the early cult of Saint George in England, see this old blogpost. For the late medieval development, see Sarah Peverley's brilliant blogpost on the subject.


Enfors we vs with all our myght
To loue Seynt Georg, Owr Lady knyght.

Worschip of vertu ys the mede
And sewyth hym ay of ryght;
To worschip George than haue we ned,
Whych is our souereyn Ladys knyght.

In hys vertu he wol vs led
gaynys the fend, teh ful wyght,
And with hys banner us ouersprede
Yf we hym love with all our myght.


George and the dragon
Chaumont BM, impr. 3 J 7 Y, Missal, Use of Langres (or from Langres)
Courtesy of enluminures

Yesterday evening I attended a wonderful concert in Trondheim cathedral by the Hilliard Ensemble. This was a part of their farewell tour, and I was very happy to have this last opportunity to hear them perform. The selection of songs spanned from the 13th century up to our times, and two of the songs were anonymous 13th century pieces in honour of Saint Thomas Becket. I found this a nice serendipity since I had earlier that day finished reading Frank Barlow's biography of the martyred archbishop. In this blogpost, I present to you the first of these songs, Thomas Gemma Cantuarie.

The death of Thomas Becket and its circumstances are well known, and his martyrdom is perhaps one of the most iconic to have come out of the Middle Ages, certainly one of the most well-remembered. His was a fascinating life, but the development of his posthumous life, the cult of his sainthood, is no less fascinating and impressive. Few other medieval cults were as stable in their popularity as Becket's, few were as far-reaching, and few resulted in such an immense body of literature, both verse and prose, Latin and sundry vernaculars, including Icelandic.

The cult began among the poor and sick of Canterbury. The monks themselves were cautious not to attract too much attention for fear of repercussions from Thomas' four murderers, and so it was that the rise of Becket's cult came from outside Canterbury Cathedral, from among those sick who were desperate for cures, and from among his old clerks and allies in France, like John of Salisbury, Herbert of Bosham and high-ranking French clergy.

Moreover, the cult of Thomas Becket was embraced by the English monarchy. Henry II humbled himself in 1174, a year after Thomas' sainthood had been confirmed by Pope Alexander III, and this was probably done in part to gain Thomas' aid against his rebellious kinsfolk and neighbours. Almost a century later, Edward I and his family veered off from his father's cultivation of Edward the Confessor in favour of Becket, and although the Confessor remained important to the king, Becket was the larger figure throughout the realm.

The longevity of Thomas' cult is also attested by Chaucer's popular tales and the illuminations used in this blogpost, the first of which dates from the 15th century. 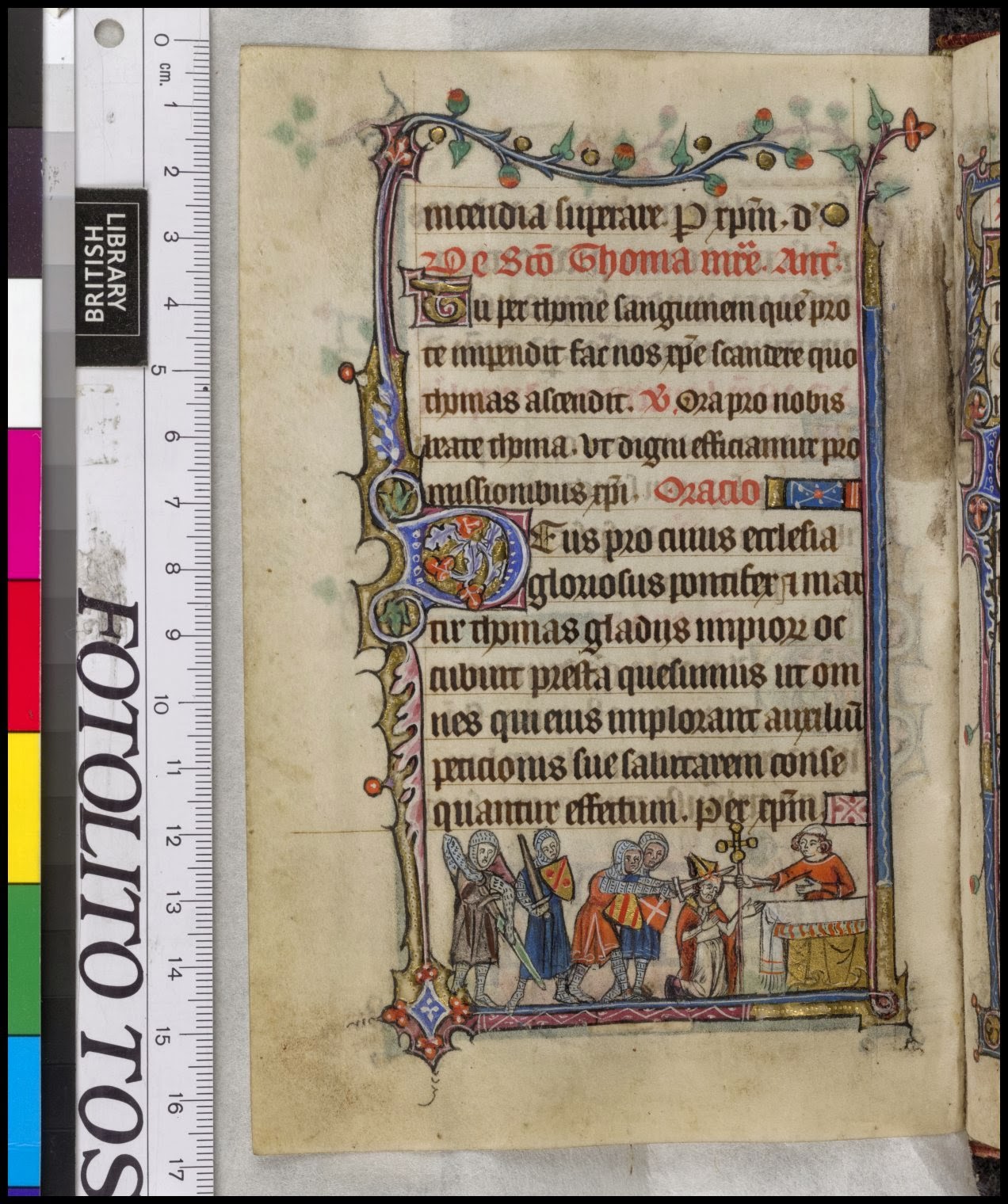