Requiem for the Plantagenet Kings - a poem by Geoffrey Hill

For a quiet end to the month of February, here is a favourite sonnet of mine by the sorely missed Geoffrey Hill. Text from this website.


Requiem for the Plantagenet Kings

For whom the possessed sea littered, on both shores,
Ruinous arms; being fired, and for good,
To sound the constitution of just wars,
Men, in their eloquent fashion, understood.
Relieved of soul, the dropping-back of dust,
Their usage, pride, admitted within doors;
At home, under caved chantries, set in trust,
With well-dressed alabaster and proved spurs
They lie; they lie; secure in the decay
Of blood, blood-marks, crowns hacked and coveted,
Before the scouring fires of trial-day
Alight on men; before sleeked groin, gored head,
Budge through the clay and gravel, and the sea
Across daubed rock evacuates its dead.
Lagt inn av Steffen kl. 10:13 Ingen kommentarer:

A passage by Derek Walcott, or, a Fragment from The Schooner Flight


February has been a busy month with me trying my best to deal with the transition from writing to reading. After having spent several months producing text, I've now reached a point in my research where I have to read in order to produce more text, and it takes some time getting used to the change of pace this forces on me. As a way of distraction from the tranquility of reading, I'm sometimes transcribing manuscript fragments which is a way of producing text, albeit very differently from the writing of my thesis.

Because of all this, my blogging this month has been rather brief and must remain so in my attempt to have four blogposts done by the end of February. For the third post, therefore, I present you a fragment of Derek Walcott's poem The Schooner Flight, a poetic sequence which chronicles the voyage of a mariner onboard a schooner while he is missing his wife and reflecting on the wild nature around him. The poem can be found in its entirety here. It is written in imitation of the Caribbean patois which Derek Walcott has known from his earliest days, and which he often applies to his work when he wishes to place the text in the mouth of fictional Caribbeans.

After the Storm, from The Schooner Flight

There are so many islands!
As many islands as the stars at night
on that branched tree from which meteors are shaken
like falling fruit around the schooner Flight.
But things must fall, and so it always was,
on one hand Venus, on the other Mars;
fall, and are one, just as this earth is one
island in archipelagoes of stars.
My first friend was the sea. Now, is my last.
I stop talking now. I work, then I read,
cotching under a lantern hooked to the mast.
I try to forget what happiness was,
and when that don't work, I study the dtars.
Sometimes is just me, and the soft-scissored foam
as the deck turn white and the moon open
a cloud like a door, and the light over me
is a road in white moonlight taking me home.
Shabine sang to you from the depths of the sea.

In May 2016, a friend and I went on an excursion to Roskilde, one of Denmark's episcopal seats, and our primary target for the trip was its cathedral. The current building has undergone several bouts of extension and renovation throughout the centuries, but its oldest part is believed to date from the 1170s, and it is believed that the building was initiated by Bishop Absalon, who in 1177 became archbishop of Lund and thus metropolitan of Denmark. Absalon's stone cathedral replaced older churches on the spot, and it was dedicated to Saint Lucius who also had been the dedicatee of the previous church. Roskilde was an important religious centre in medieval Denmark, and in the 1140s a chronicle was written here, a chronicle now known as the Roskilde Chronicle, or Chronicon Roskildense. 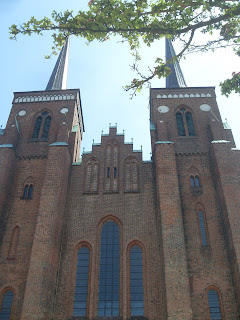 The front of Roskilde Cathedral


The interior of Roskilde Cathedral is lavishly decorated with wall-paintings and sculptures, and most of them dating from the fifteenth-century onwards. There are many wonderful things to relate about these decorations, and in future blogposts I aim to return to several of them. In the present blogpost, however, I will merely give a taste of the splendour which is housed within the cathedral, and to do so I will give you two representations of Saint Christopher, one of the most common saints in medieval European art. 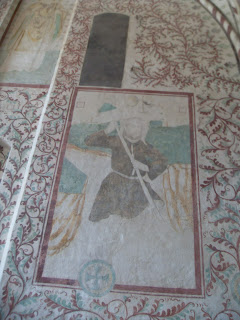 
The legend of Saint Christopher - Christophanes or Christ-bearer - tells of how a pagan soldier, often depicted as a giant and sometimes even as a dog-head, walked about the world in order to find the most powerful master so that he could submit to him. He met the Devil and sought to serve him, until he discovered that the Devil feared Christ. Intent to become a servant of Christ, Christopher sought instruction in the Christian faith, which he received from a hermit. As a form of service to Christ, Christopher stationed himself at a river to ferry people across. Since he was thought to be a giant, he is normally shown wading the river with his passenger sitting astraddle his neck. One day he was ferrying a little child across the river, and mid-stream the child became so heavy that Christopher barely could stand upright. The child then told him that he was Christ, and that the heaviness was the weight of the world which Christ carried. As proof of the child's testimony, he told Christopher to plant his staff in the ground and let it blossom the next day. When Christopher saw his staff blossoming - which is why the staff can be seen to bear leaves and fruits in the medieval depictions - he became a preacher for the Christian faith. He was later martyred for his missionary effort. 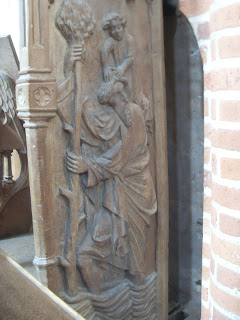 Saint Christopher's role as the patron of travellers ensured his popularity throughout the Middle Ages, and he was often included among the Fourteen Holy Helpers, a late-medieval saint collegium whose members varied throughout Europe. The depictions of Christopher at Roskilde Cathedral are typical examples of his most common iconography.

I am currently putting the final touches on an article with which I have been preoccupied for the past month or so. In this article I have been pursuing a favourite fascination of mine, namely the descriptions of the peripheral and unfamiliar in medieval and pre-medieval writing. Consequently, my article has brought me into contact with descriptions of wild men and women inhabiting the most forbidding and inhospitable parts of the earth, and I have relished in the tales of these distant lands and their various inhabitants, different from the authors of the medieval texts in several respects.

One of the most famous symbols of geographical remoteness that has come down from us from the Graeco-Roman literature, which infused the medieval authors with a wide range of ideas about the geographical periphery, is the land of Thule or Tile. This island was first described by Pytheas of Massilia in 330 BC, and has since then been identified as a range of different locations in the North Atlantic, including Iceland, and Greenland.

The cultural history of Thule is longwinded and immensely fascinating, and one that I would love to return to at some point. For the time being, however, I will only present one of the many appearances Thule has made in cultural history, namely a poem written by Henry Wadsworth Longfellow. (Text taken from poetryfoundation.org.)

I was pointed to this poem when I read a fascinating blogpost about the island of Kerguelen in the southern Indian Ocean, and it reminded me that Thule as a symbol of immense remoteness and the edge of the world is no longer limited to the northern hemisphere, but also carries a symbolic value for the geography of the southern part of the globe. 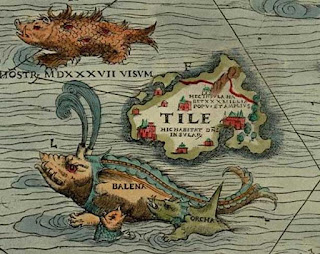 With favouring winds, o'er sunlit seas,
We sailed for the Hesperides,
The land where golden apples grow;
But that, ah! that was long ago.

How far, since then, the ocean streams
Have swept us from that land of dreams,
That land of fiction and of truth,
The lost Atlantis of our youth!

Wither, ah, wither? Are not these
The tempest-haunted Orcades,
Where the sea-gulls scream, and breakers roar,
And wreck and sea-weed line the shore?

Ultima Thule! Utmost Isle!
Here in thy harbors for a while
We lower our sails; a while we rest
From the unending, endless quest.