For the past three years I have been working as a PhD fellow at the Centre for Medieval Literature at University of Southern Denmark in Odense. This job ended with the submission of my PhD thesis on October 02, and I am therefore very pleased to announce that I will be starting in a new job tomorrow, November 01. This job is a four-month position as a research assistant, financed partly by the Centre for Medieval Literature and partly by the University Library, and my job will be to assist in the identification, cataloguing, digitisation and research of a collection of old books which the library purchased from an old boarding school back in the 1960s. This school was founded in the early seventeenth century, and this book collection contains not only a wide array of printed books from the fifteenth century onwards (including some interesting incunabulas), but also - within these printed books - a high, and rising, number of fragments from medieval manuscripts that are in the process of being identified.

I have only a cursory idea of what the next four months will bring in terms of excitement, tasks, experiences and discoveries, but as I have already been engaged with some of this material during my PhD I do know what potential there is in some of the fragments and some of the incunabulas contained there. I have been very fortunate to be allowed this chance to broaden my horizon and to immerse myself in this treasure trove of old books, and I look forward to communicate these finds as often as I can.

Line trawl for each word
with the home-sick toss
of a black pirogue anchored
in stuttering phosphorus.

The crab-fishers' torches
keep to the surf's crooked line,
and a cloud's page scorches
with a smell of kerosene.

But, line, live in the sounds
that ignorant shallows use;
then throw the silvery nouns
to open-mouthed canoes.


These days I'm taking a vacation at home in my native village, Hyen, in Western Norway, as a way to wind down after the stressful conclusion to my PhD process and the submission of my thesis. The days have been filled with the kind of autumnal atmosphere that I was sorely missing in the more southerly Denmark, and I have relished in the yellow leaves and cold evenings. But even though I'm on vacation, I'm not completely free, and the other day I had to turn one of the rooms into a makeshift office for a meeting I was joining via Internet. It did feel good to have some academic impulses even in these days of rest, and especially when the view from my office was the one below. 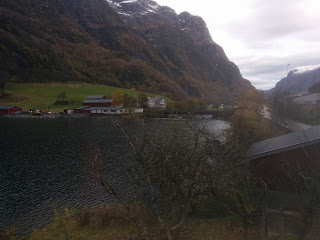 Consummatum est - it is completed. This is the pious blasphemy with which I have quietly expressed to people that I have submitted my PhD thesis, and that I have finished the work of three years, two months and two days. It all happened on October 02 2017 with a simple e-mail containing a bouquet of attachments, and having clicked "send" I sensed a rush of calm and delight. This sensation lasted for about an hour, an hour in which I called my loved ones to spread the good news, but the elation was quickly punctured by an e-mail saying that I had handed in to the wrong faculty, a blunder which was the result of trying to locate the correct instructions for submission on the university's websites. This blunder did not cause any actual problems, the attachments were forwarded to the right person, and I also send the e-mail again to the right person, partly as a safety measure, partly - I suspect - as a way of denying to myself that I had cocked it up.

The blunder did not cause any actual problems, but it came at the tail end of several weeks in which I had been tossed between different emotional states, back and forth between confident and worried, patient and impatient, calm and stressed. This period included me having to ask for a two-week extension, which was then followed by a weekend's extension, and it also contained a confusing and sometimes contradictory quest for the needed details about length, size, page-limit, character count, and structure of the thesis itself.

Because the blunder came on top of this, my elation was soon exchanged for a sense of incompetence, and it no longer felt like the great fulfillment of three of the happiest years of my life. Instead, it felt like a somewhat bathos-filled, anti-climactic finale to some strange tragicomedy I didn't really comprehend. I also think this feeling was exacerbated by the fact that I had submitted electronically - I had submitted a virtual, unbound and unprinted copy of my thesis, not a physical manifestation of my intellectual labour but a digital copy that remained untangible no matter how often I would upload it to Dropbox or e-mail it to myself to make sure I would have a back-up of it. It was all done by the clicking of a few icons on a slow computer in a lonely office on an autumn day whose general meterological conditions I no longer remember.

It has now been nine days since I handed in my thesis, and in the interim I have come to realise that the post-submission fatigue has been greater than I thought and much stronger than myself. I have spent part of the time relaxing, reading poetry, preparing for travels, and going back to the office to clean out books, to socialise with friends and colleagues, and to take care of various minor things. It has been nine days, and this is the first time I have been able to write anything, or to even attempt to put my thoughts into a coherent whole again. These days have been long and quiet, and also difficult, because for the first time in three years there is no major on-going project that I need to tend to, that I need to finish within a looming deadline, and I simply don't know what to do. I had thought these days would be spent reading, or going out to eat and to stroll around flaneur-like about town. But no, I have been unable to do so, and I think it is because I have not yet come to terms with the fact that I have submitted, that I am done, that I only have a distant defence to worry about and that's it. I ascribe this feeling to the contrast between the scramble of the past two months and the unceremonious completion of the thesis, the almost doubtful reality of my submission.


Since I submitted, I have been able to see a printed version of my thesis, the one sent to my secondary advisor for perusal before the defence, and it did feel great to see my words on a physical page, to see how the structure and order of the work plays out in print, and to be able to do the very tangible and familar act of browsing with pages that I had myself filled with words and ideas. It did feel great, but I didn't push away what the final weeks of the process had imprinted upon me, and I still find that the energy I thought I would have for books and exploration is something that is on its way back, slowly.

But I can at least await its return with the knowledge that as far as my thesis goes, it is completed.
Lagt inn av Steffen kl. 15:39 Ingen kommentarer: