The Humility of Snails, part 1 - The problem with gastropods 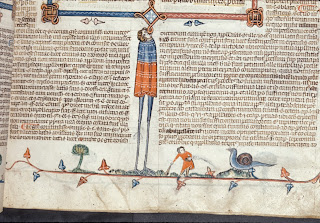 Out of Africa something new always comes, remarked Lucretius in his famous poem on the nature of things. In a somewhat similar way there always comes something new from the wonderful British Library's medieval blogpost. Recently, they issued a lovely post on marginal snails in medieval manuscripts, which can be read here. As pointed out by the eminent Sarah J. Biggs, there are various explanations proffered for what the snails meant to the medieval onlooker, what role or roles they play in the theatre of the page and how they should be understood.

Some of these explanations have been summarised by Michael Camille in his famous book on medieval marginalia, Image on the Edge, and also in the British Library blogpost. To my mind, removed as it is from the early scholarly discussion on the subject, all of these suggestions are wanting to some extent. While some of them, like Lilian Randall's suggestion positing the snail as a counterpoint of chivalry, may have validity in some geographies and some particular epochs, it can only be applied with extreme caution and acute sensibility to the historical context of the manuscript in question.

In this two-part blogpost, therefore, I would like to postulate another possible approach for how the snail should be understood in medieval iconography. Naturally, I lay no claim to have found the definite answer, but it might help us to get closer to some of the aspects of the snail imagery.

The pictures in this post are all from the British Library, though some have been gathered from extraneous sources, and I am particularly indebted to Sarah J. Biggs for some of them. As the reader will notice, several of them are also found in the British Library blogpost. This is not an attempt to copy the great work performed there, but rather a necessity owing to limited time and the desire to present a selection which offers a somewhat diachronic overview.

The reason why this blogpost is two-part is because there is a lot of minutiae to take into consideration in this analysis, and to spare the reader any excess of verbosity, the essay has been divided into two parts. This part presents the problem, and two of its exhibits.

Snails were not the only creature who were manhandled at the bottom of the pages
Bas-de-page from MS. Royal 10 E IV
Courtesy of British Library


The symbolism of the snail

One of the reasons it is difficult to make assessments about the meaning of the snail, is that the extent of its symbolism in the Middle Ages is obscure to us. The basic characterstics of the snail are of course timeless, such as its slow speed and its house, but how these characteristics were applied can not be easily mapped. Hans Biedermann points out that throughout the ages the snail has variously been considered as a symbol of simple living, and a symbol of the Resurrection.

The snail was also said to have medicinal properties. Hildegard von Bingen (1098-1179) claimed that powder ground from snail shells should cure a person bitten by serpents, whereas a concoction made of slugs and earthworms allegedly cured abscesses. Hildegard also referred to snails as testudines, meaning turtles.

These are small glimpses into how the snail was perceived in past times. For some reason they appear not in some of the most famous bestiaries of the High Middle Ages - that of Philippe de Taon (written c.1119) and the MS. Bodley 764 (mid-13th-century) - and the main source to animal reception is therefore seemingly unhelpful, although a more rigorous search may yield more material. Joyce Coleman, in a comment on the British Library blogpost, quotes Chandos Herald's (fl.1360s-80s) Life of the Black Prince written in the late 14th century as giving an example of people mimicking snails. The author refers to such people in a rather disdaining tone, as were it unworthy of a nobleman.

Because it is so difficult to assess the particulars of the snail's place in the medieval mind, we therefore have to consider each occurrence of this symbol in light of its historical context. In the following I will look at a few selected examples - too few for assessments, but sufficiently many for guesswork - which will be discussed in light of context. The timeframe of the works selected is c.1290-1430 and the selection contains images from England, France, Holland and Austria.

The working hypothesis for this blogpost is that several of the snails from medieval margins can be understood when seen in light of the ideal of religious humility, which found a certain mendicant shape in the religious milieu following the foundation of the Franciscan and Dominican orders in the early 13th century.

Humility has of course always been a key virtue in Christian theology, but it has been formulated in various ways throughout the centuries. In the 12th century, the age of crusades, there sprang forth a new ideal of sainthood which praised the saint who abandoned his riches and fought for the cause of God. This ideal was moulded on the legend of Alexis of Odessa, a nobleman who renounced wealth and family for a life of religious asceticism. Within this paradigm of the world-renouncing recluse, asceticism was conjoined with a militant apostolicity, which can be seen in the hagiology of the royal saints Stephen of Hungary and Charlemagne. It was this paradigm which most likely served as conduit for the orders of warrior monks which emerged in the first half of the 12th century.

In the 13th century there was a paradigm change. Following the teachings of Dominic and Francis, there came a new ideal of sainthood during the 13th century. The militant apostolicity was no longer as important, and the emphasis was on self-abnegation, poverty, munificence towards the poor and meditation on God's truth. This resulted in the canonisations of saints who differed from the high ecclesiastics and royal saints of the 12th century, namely reclusive noblewomen and mendicant preachers. This is not to say that military feats were not important. In the canonisation proceedings of Louis IX of France (canonised 1297), his role as crusader was of some importance. Interestingly enough, it was the Franciscans who most vociferously had urged on the crusades of Louis. Nonetheless, the mendicant paradigm of the 13th and the 14th centuries tended to emphasise a kind of humility which embraced poverty and good works, which almost disassociated itself from the militant prowess of the lay aristocracy.

The selection of marginalia in this post is largely gathered from the period when the mendicant ideal of humility exerted strong influence over Western Christendom, and (with one exception) before it entered into the most excessive forms of public self-mortification witnessed in the wake of the black plague. 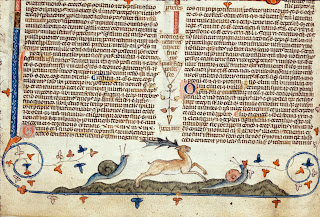 The first manuscript to be considered is MS. Royal 10 E IV, also known as the Smithfield Decretals. This is a MS. from the turn of the 13th century containing the decretals of Pope Gregory IX, edited by Raymund de Piñafort (c.1175-1275) with a gloss of Bernard of Parma (d.c.1266), and it is of Southern French origin. This is a collection of Papal letters and as such belongs to the very diverse category of religious literature, though there might also be some political content to the texts. Although the book is of French origin, some of its illuminations were later English additions.

Here are two particularly striking renditions of the snail in combat. One of these can be seen above, where a youngster prepares to attack a snail with slingshot in the manner of David. Whether this is a representation, a mock-representation or an inversion of David and Goliath - or none of these - can not be ascertained. Although the sling is a typical attribute of David, usage of this weapon may not be limited only to him. It is therefore possible that this is a representation of youth disdaining humility, though of course this is mere conjecture.

We also find another scene of combat between snail and man in the Smithfield decretals, as seen below. Here the knight, armed with a club, engages in hand-to-hand combat - or hand-to-horn combat - with what seems like a rather aggressive snail. Whether it is significant that the knight here uses a club rather than the noble sword I cannot say, but if the hypothesis on the snail as a icon of humility, this may represent the unchivalrous soldier whose pride eclipses the virtues sought among the Christian soldiery. The case here is very uncertain, however, since I do not know the texts these images accompany, and I can therefore not judge the extent to concordance between text and image. 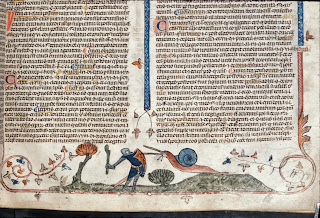 This book, MS. Stowe 17, or the Maastricht Hours, dates from the first quarter of the 14th century. It is a book of hours produced in Maastricht, Holland, for a noblewoman. As a female of the higher echelons of society, she belongs to the very societal group who throughout the 13th century had produced an increasing number of saints, and would continue to do so in the decades ahead. It is therefore likely that humility was one of the key virtues which the lady was exhorted to embrace. With some liberty of fancy, one might image it was this same noblewoman who seems to communicate with the stag on f.205, where the text is taken from Job 13: answer me, how many sins and iniquities do I have. The deer is among other virtues praised for its caring for other members of its society, and to be a hunter of serpents, i.e. sins. 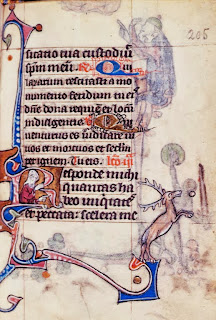 
The snail imagery in the Maastricht Hours does not belong to combat scenes, but to a very curious hybrid, namely a cat popping its head out of a snail shell, disguised with the snail's horns. It appears next to a prayer for the family, common to missals, Deus qui caritatis dona per gratiam sancti spiritu tuorum cordibus fidelium infundis, God who give Your charity through the grace of Your Holy Spirit, pour it unto the hearts of the happy (my translation). 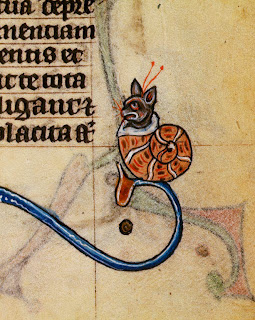 
Whether this cat in a shell bears any connotations of humility remains unsolved, but the combination of these two beasts is interesting in light of the humility of the mendicant paradigm of sainthood. While the cat was considered appropriate company for nuns, the snail may in its turn represent the virtue of humility and possibly also self-abnegation that the saintly lay woman was expected to strive for in the 14th century. 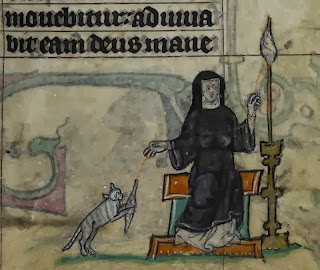 Here ends the first part. With the exposition of the approach and two starters, I hope this will be a good starting point for the tentative conclusion in my next blogpost, where I will examine select images from five more manuscripts in light of the hypothesis of the snail as a symbol of humility.