The Humility of Snails, part 2 - The snail and the knight

In my previous blogpost I launched the suggestion that snails in medieval marginalia might be read as symbols of humility, often depicted in contrast to the prideful life of knights and warriors. Furthermore, I suggested that this symbolism was influenced by the paradigm of sanctity that emerged with the foundation of mendicant orders, in which humility was now associated with good works, self-abnegation and a reclusive lifestyle. This is a change from the 12th-century, in which humility and warfare were often twin virtues, inspired by the legends of St. Alexis of Odessa and exemplified with the emergence of the orders of warrior monks such as the Knights Templar and the Hospitallers. This is of course not to say that the mendicant orders were in opposition to the crusades. On the contrary, the Franciscan liturgy for St. Louis - composed towards the turn of the 13th century - praises him for his crusades and viewed them as an imitatio Christi. However, warfare became frequently disassociated with sanctity in the 13th century, and Louis is therefore more a deviation proving the point than anything else.

This two-part exploration was triggered by a recent blogpost from the ever-so-lovely British Library's medieval blog, and the piece in question was written by Sarah J. Biggs. In this second part, I will provide examples from several manuscripts from the time of this paradigm of sanctity and into the 15th century, looking at how well they fit with the idea that the snail is a symbol for humility. For the pictures from MS. Yates Thomspon 27 I am gratefully indebted to Robert Miller. Almost all pictures courtesy of the British Library.

The Gorleston Psalter, found in Add. MS. 49622, is an English psalter made in the timeframe 1310-24, and contains two depictions of the snail that fit very well with the idea of the snail as a symbol of humility. The first example can be seen above, where a knight has planted his sword in the ground and lifts his hands, pressed together, at the snail as if in devotion. If the slug represents humility and the peaceful life, this scene may show a warrior, a man of pride, casting aside the weapon of his trade in devotion to the virtue which stands in starkest contrast to his own way of life. We might even imagine there has been some sort of combat or debate in advance of this scene, and the knight is now defeated and yield to the humble victor. This idea is strengthened by the second example, as seen below.

Monkey business of the worst kind


Here we see combat depicted, an arrow launched by an ape is flying towards the snail. Apes (distinguished from the monkeys by their lack of tails) were frequently associated with evil and vices in medieval imagination. Bestiaries claimed that they took their name from the fact that they aped after humans, and as such came to represent a mirror-image to the human world, where apes and other simia were doing the devil's work or at least turned the ideals of the Christian world upside down. This ape is clearly at war with humility, and from the look of it he seems to be winning, reminding perhaps the viewer that the devil can overcome mankind's humility.

Next up is MS. Yates Thompson 19, containing Li Livres dou Trésour, an encyclopedia written in 1264 by Brunetto Latini, the master of Dante Alighieri. The manuscript was made in the timeframe 1315-25 in Northern France. As an encyclopedia it was not exclusively - nor perhaps even primarily - a work of devotion, but we might presume that Christian devotion is not absent from the work. 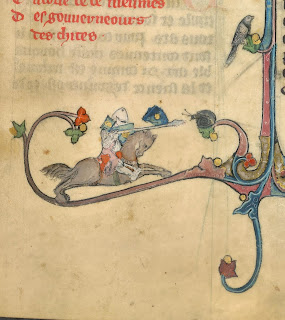 In the manuscript, as seen above, we find another combat scene featuring a snail, here standing against a charge by an armoured knight. We don't know the outcome, but here we might imagine the haughtiness of war about to do battle with the virtue of humility. This scene is particularly interesting because of another, similar, combat scene, in which the knight's target is not a snail, but a gryllus, otherwise known as a hybrid. 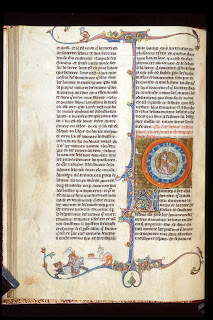 The meaning of such hybrids is still a matter that remains unsolved, but the snail and the gryllus can easily be contrasted as representatives of two different worlds, the virtuous and the viceful, the good and the evil. If this is the case, the scenes above can be said to depict examples of bad and good chivalry respectively, for it was customary in medieval didactic writing to educate through good and bad examples alike, a tradition reaching all the way back to Bede's Historia Ecclesiastica and beyond.

This psalter, found in MS. Add 42130, was made in the timeframe 1325-40 on the orders of Geoffrey Luttrell III (1276-1345), a Lincolnshire landowner. The work was carried out in stages and its illumination programme was left unfinished for reasons unknown. The snail found in this psalter is different from the rest here presented, in that it does not seem to interact with anyone, so that it does not invite comparison with a representative of either vices or virtues. It is simply a bas-de-page illumination, yet it might be intented to serve as a mnemonic helper for the psalm text. The text is from Psalm 89 and the snail is just below the verse "Blessed are those who have learned to acclaim you, who walk in the light of your presence". If this snail, too, represents humility or meekness, it certainly fits well with the psalm text in question.

The Hours of Yolande of Flanders

This book of hours, following the Use of Paris and found in MS. Yates Thompson 27, was made in the timeframe 1353-63 for Yolande of Flanders. This wonderfully weird book contains three snails, all of which can be successfully read as symbols of humility. It is of course particularly interesting to note that as a female member of high society, Yolande was a representative of that echelon from which the Roman Catholic sanctorale drew many of its new members in the 14th century. 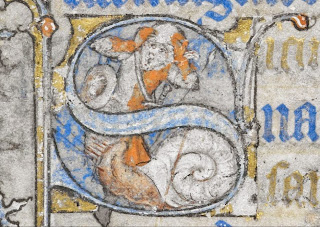 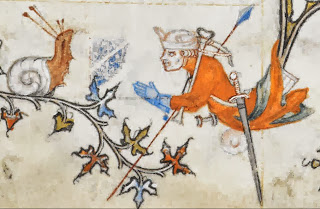 In the selection above we find again the motif of snails and knights. The first seems frightened and awestruck by his encounter with the gastropod, possibly in the realisation that he has erred in his ways, or something in that vein. The second might be considered a continuation of the first scene, and this knight - or the same knight - has succumbed to the mastery of the snail, yielded his pride of arms, perhaps, to the humility so emblematic of 14th-century sainthood. 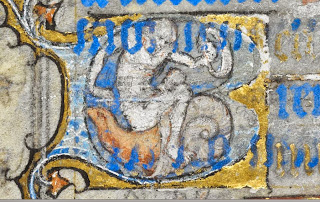 There is also another fascinating example in this MS., as seen above. What this naked man represents is difficult to say, though if the snail is a symbol of humility this might very well be pride sitting astraddle the animal, chastising it with a club.

The last example in this blogpost takes us out of the 14th-century and the mendicant paradigm of sainthood, and also away from the psalters and books of hours. Like Latini's Books of Treasure, this is an anomaly, but intended as a continuation of the collection so far considered. This book is Ulrich von Pottenstein's Spiegel der Weisheit, here found in MS. Egerton 1121, an Austrian MS. from 1430. Here, as seen below, a snail is standing face to face with a black cat, which, as we know, has accrued a particularly negative reputation. If the snail here, too, is meant as a representative of humility, it is presumably mirroring the wickedness commonly ascribed to the cat. Their symbolic difference may perhaps be exacerbated by the fact that the snail is here rendered in white - though that might also owe to the fact that Southern European snails do have white shells. 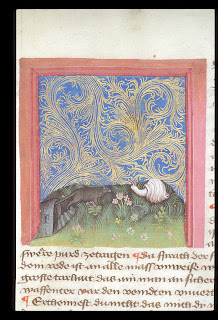 The array of books presented in this two-part blogpost spans a wide variety of literature, about two centuries and several countries. Each has contained some depiction of a snail or a snail-like hybrid. Reading these images as symbols of humility, in tune with the Christian virtues and the emphasis of contemporary sanctity, gives meaning and makes sense of the snails and their companions and environment on the page, both as protagonists facing a viceful foe or as mnemonic devices accompanying the page's text.

This in its turn proves nothing. We have too little information about the extent and the frequency of snail imagery in devotional books - and non-devotional for that matter - to make any broad statements. This has merely been a thought-experiment in which the snail has been interpreted in a particular manner. As I hope to have successfully shown, it is indeed a possible conjecture which fits both with the contemporary currents and the purpose of the books in which most of them are found. Much remains to be done here, and in the future it will be necessary to carefully consider each illumination together with accompanying text and the illumination programmes of their respective books. However, I hope this demonstration has established one possible way of making sense of these images, which might be considered just as plausible as the suggestions put forth by past scholarship.