Under the Hog, part I - Histories and Mysteries

The Cat, the Rat and Lovell our Dog
Rule all England under a Hog.
- William Collingbourne, July 18, 1484
Uncertain way of gain! But I am in
So far in blood that sin will pluck on sin:
Tear-falling pity dwells not in this eye.
- The Tragedy of Richard III, William Shakespeare
Not as we are but as we must appear
- Funeral Music, Geoffrey Hill
King Richard III of England (1483-85 is a celebrated figure in York and in the following blogpost I aim to present my encounters with Richard III throughout the city. The present blogpost is a historical prelude for the benefit of the reader and the indulgence of the writer. 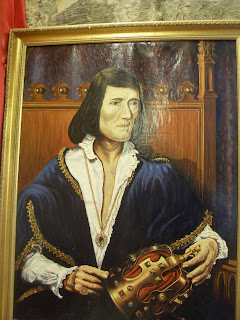 Because I cannot flatter and speak fair,
Smile in men's faces, smooth, deceive and cog,
Duck with French nods and apish courtesy,
I must be held a rancorous enemy.
Cannot a plain man live and think no harm,
But thus his simple truth must be abused
By silken, sly, insinuating Jacks?
- The Tragedy of Richard III, William Shakespeare

King Richard III is generally remembered as one of the most ruthless and villanous kings of English history, a legacy mainly due to William Shakespeare's poetic continuation of Sir Thomas More's propagandistic histories. Richard is here described not only as a murderous schemer, but also as a man deformed and, as Shakespeare puts it, "cheated of feature by dissembling nature." His physical appearance is an aspect perennially perused throughout the play, and partly stems from one of the few portraits of him, a portrait which was slightly altered in the Tudor era to add monstrosity to the last Plantagenet king. For comparison see the painting at the end of this blogpost, which is the oldest surviving painting of Richard. 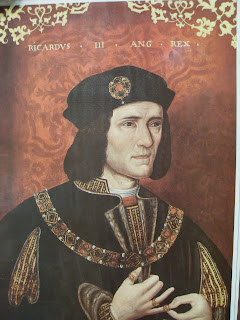 I, that am curtail'd of this fair proportion,
Cheated of feature by dissembling nature,
Deformed, unfinish'd, sent before my time
Into this breathing world, scarce half made up,
And that so lamely and unfashionable
That dogs bark at me as I halt by them;
Why, I, in this weak piping time of peace,
Have no delight to pass away the time,
Unless to spy my shadow in the sun
And descant on mine own deformity
- The Tragedy of Richard III, William Shakespeare
Richard came to power following the death of his brother, king Edward IV (April 9 1483), and he was appointed protector awaiting the maturity of his nephew, the then twelve year old Edward. The young prince was taken in custody by Richard and the prince's uncle Anthony Woodville, earl Rivers was executed on suspicion on plotting against the crown, an event included in Shakespeare's chronicle of Richard's alleged cruelty. Later that year Richard seized the throne following a complex process of court politics and intrigue reaching its conclusion with his coronation July 6 1483. 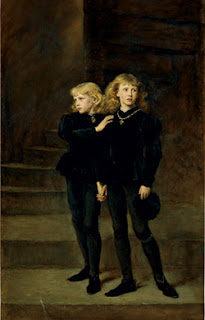 Pity, you ancient stones, those tender babes
Whom envy hath immured within your walls!
Rough cradle for such little pretty ones!
Rude ragged nurse, old sullen playfellow
For tender princes, use my babies well!
So foolish sorrow bids your stones farewell.
- The Tragedy of Richard III, William Shakespeare
According to Shakespeare Richard was driven by insatiate ambition, as stated:
Then, since this earth affords no joy to me,
But to command, to cheque, to o'erbear such
As are of better person than myself,
I'll make my heaven to dream upon the crown,
And, whiles I live, to account this world but hell,
Until my mis-shaped trunk that bears this head
Be round impaled with a glorious crown.
- King Henry VI part III, William Shakespeare
An equally plausible motivation, however, would be to avoid that instability inherent in a child-ruler, a scenario all the more poignant due to the preceding decades of conflict, an epoch inaccurately labelled the wars of the roses.
Richard's government - both as protector and king - was marked by tension and unrest, shown by the rebellion of 1483 and the dissatisfaction with his clique of advisors, elegantly - but inaccurately - phrased by William Collingbourne: 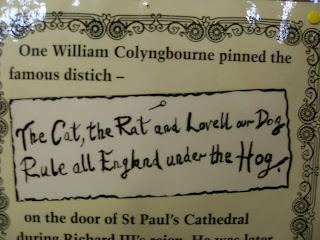 The distich pertains to Catesby, Ratcliffe and Lovell - whose emblem was a dog - and of course Richard whose coat of arms depicted two white boars. 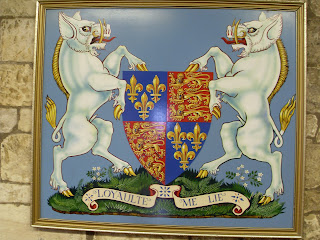 As chauffèd Bore his bristles doth upreare
- The Faerie Queene, Edmund Spenser
However, Richard's government was also a time of some civic progress and occasional calm, making his reign less trouble than we are led to believe by Shakespeare. The recurrent tension, however, must be ascribed perhaps more to dynastic factors, such as the young age of the prince and the Woodvilles, than any demonic behaviour on behalf of Richard III. Doubtlessly he got rid of political opponents in circumstances that must have appeared dubious at best to his contemporaries, and he may very well have had some demons of his own to battle, but he was also the head of a kingdom in severe financial and political difficulties, looking back on decades of civil strife and his actions may very well have been driven by a desire for stability rather than personal ambition. His brief reign is still a matter of contention between scholars and laymen alike, and especially Richard's role in the mysterious fate of prince Edward and his younger brother, collectively remembered as the princes in the tower. Whether there ever will be a resolution to the latter question is dubious, whether there will ever be consensus concerning the character and rule of Richard is impossible, despite The Richard III Society's commendable and untiring quest for truth. 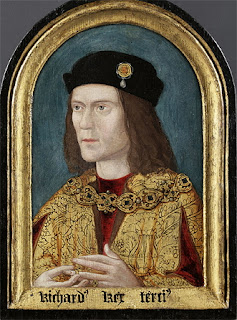 Come, muster men: my counsel is my shield;
We must be brief when traitors brave the field.
- The Tragedy of Richard III, William Shakespeare
Lagt inn av Steffen kl. 17:36