Ignorance and Experience: An Illuminator's Trajectory

There is an animal called the elephant, which has no desire to mate.
- MS Bodley 764, translated by Richard Barber
Medieval bestiaries contained creatures both real and legendary, whose ways of life served as moral fables for humanity. These books were richly illustrated, but the illuminators rarely knew much about what the various beasts looked like, relying instead on traditional depictions or literary descriptions from authors like Pliny or Isidore of Seville. In some cases this should come as no surprise since many of the animals described did not exist or were at best distorted representations of actual animals. A favourite example of mine is the bonnacon, a beast with a bull's body and a horse's mane whose poisonous excrement was its only means of protection against predators. 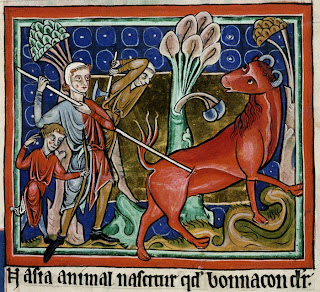 Bonnacon from the MS Bodley 764
In other instances the beasts were less than realistically depicted on account of their foreign provenance, and this was of the case with the elephant. The author of the MS Bodley 764 bestiary, for instance, had heard or read about how the distant Indians or Persians used elephants in warfare, putting wooden towers on their backs and firing arrows from the ramparts. He had also learned that the elephant could only mate after having eaten from the mandrake - here depicted as a tree - and for this the elephant becomes an allegory of Adam and Eve who only indulged in the pleasures of the flesh after having eaten the forbidden fruit. 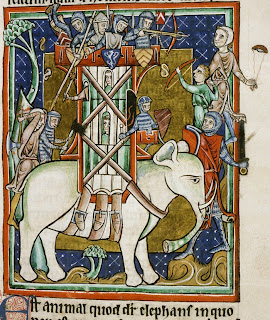 War elephant from MS Bodley 764
The elephant offers a rare example of an illuminator's trajectory from ignorance to experience. The illuminator in question is the Benedictine monk Matthew Paris, known for his historiographical and hagriographical works. In his bibliography we find the wonderful and wonderfully illuminated Chronica Majora, a universal chronicle whose last part covers the years 1254-59. The elephant occurs at least twice in the pages of this work and it shows very clearly the difference between knowing of an animal and actually knowing an animal.

In 1241 Richard, Earl of Cornwall, King Henry III's younger brother, returned from a crusade in the Holy Land. He probably met or corresponded with Matthew Paris at St. Albans, and the tale he told allowed the illuminator to fill his pages with a number of curiosities. One of these curiosities Richard experienced in Italy where he was Emperor Friedrich II's guest. When Richard went to the city of Cremona he was met with a joyous procession led by a decorated elephant with a brass band playing on its back. This was the emperor's elephant, a part of his exotic menagerie for which he was well known, and a beast Matthew Paris had never seen. Consequently his depiction of the elephant relied heavily on a convention established in the bestiaries, for instance the beast's lack of knees. 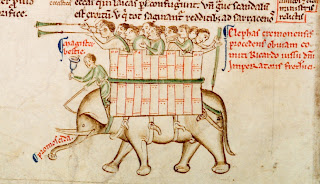 The elephant of Cremona from Chronica Majora
In the second part of Chronica Majora we come across something very different. King Louis IX of France sent Henry III an elephant as a gift in 1255 and it was kept at the Tower of London together with the rest of the king's menagerie, a menagerie that among other specimens included an polar bear brought to him from King Håkon IV of Norway. For the first time Matthew Paris, who was both close to King Henry and badmouthed him quite viciously on occasion, had the opportunity to behold an exotic beast in the flesh and discover that it really possessed knees. This can be seen in the remarkably realistic portrayal of the king's elephant in Chronica Majora, a rare case in which we can see for ourselves the trajectory of a Medieval illuminator's experience. 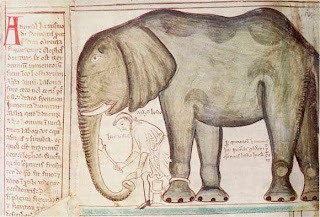