and abstinence crowns all our care
with martyr-laurels for this day
- Veni Coronaberis, a garland for Helen Waddell, Geoffrey Hill

One of the books I picked up during my last trip to York was a volume of Medieval Latin lyrics translated into English by Helen Waddell and published in 1929. To me this was a phenomenal treasure as I have a great interest in Medieval literature in general and Medieval poetry in particular. In this blogpost I would like to share with you a small selection of short poems from my newly-acquired volume. 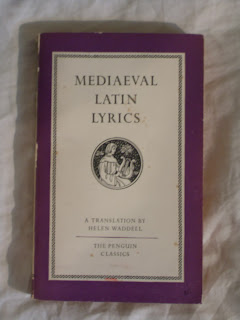 Helen Jane Waddell (1889-1965) was born in Tokyo to a missionary family and received her education at Victoria College and then at Queen's University in Belfast. From there on she embarked on a remarkable life of letters that earned her a wide-standing and long-lasting reputation. A formidable Medievalist she mastered both fiction and non-fiction and published several significant books: Her study of the performers of Medieval Latin poetry, The Wandering Scholars (1927), was an immediate success and so was her novel Peter Abelard (1933).

Despite her academic brilliance she was not strictly accurate in her translations and she rendered her English versions in a language reminiscent of the bardolatry of the 19th century, giving the lyrics a stilted quality even more noticeable to a modern ear. This is not, however, to say that she was a bad translator, for translation is always an art of compromise and fraught with contemporary expections the translator must take into account. I do not myself speak Latin, nor do I read it very well, so I am not in a position to point out Helen Waddell's various inaccuracies, but I have given here the original texts parallel with her renditions in order to give people of Latinity a little challenge.

From an MS. of St Rémy at Rheims


From an MS. of Beauvais

From an MS. of Beauvais

From an MS. of Monte Cassino

Nullum opus exsurgit quod non annosa vetustas      No work of men's hands but the weary years
expugnet, quod non vertat iniqua dies.                    Besiege and take it, comes its evil day:
grammata sola carent fato, mortemque repellunt.    The written word alone flouts destiny,
preterita renovant grammata sola biblis.                  Revives the past and gives the lie to Death.
rupe, suo legem cum dederat populo.                     God's finger made its furrows in the rock
sunt, fuerant, mundo venient quae forte futura,        In letters, when he gave his folk the law.
grammata haec monstrant famine cuncta suo.       And things that are, and have been, and may be,
Their secret with the written word abides.

The following notes are largely based on Helen Waddell's own from 1929.

Pulchra comis: This poem is found in the 9th-century Royal MS. 15. B. xix. The poem was attributed to Virgil by the scribe, while Aldhelm of Malmesbury attributed it to Ovid.

Te vigilans oculi/O blandos oculos: These two poems comes from an anthology of the late 9th or early 10th century whose MS. was lost as a consequence of the Revolution.

Ad Paulum Diaconum: 12th-century tradition attributed the lyric to Charlemagne. Paul the Deacon, at some point a monk at Monte Cassino, did end up in Charlemagne's service for a while, but that is probably the only kernel of truth in this tradition. Although Charlemagne's love of poetry is more or less an established fact, it is not known that he himself attempted the art. Paul the Deacon is most famously known as the author of The History of the Lombards.

Ad Eigilum de libro quem scripserat : Hrabanus Maurus (776-856) was given the nickname Maurus by Alcuin after a disciple of Benedict, the father of monasticism. In 842 he resigned from his position as abbot of Fulda, but after seven years of living in solitude with his books he was summoned by Louis the German and became archbishop of Mainz in 847. The rest of his life was marked by theological strife against the heretic - and one might yield to that beast Anachronism and say proto-Calvinist - Gottschalk who preached the predestined damnation of men.

Apologia pro vita sua: Sedulius Scottus (fl.848-74) was, as his name tells, originally from Ireland. He came to Liège sometime before 851 where he became a scholasticus and gained a reputation as a poet and a scholar. He is not to be confused with Coelius Sedulius, author of Carmen Paschale.