These days I am reading up on Danish church history for a couple of papers that I need to write in the course of the autumn, and this has brought back a lot of pleasant memories from my time in Denmark. To a foreigner such as myself, Denmark at first seemed like a country too small to host much in terms of treasures and wonders - small as a nose was what my grandparents would often say - but staying in Denmark for four years upended that notion. There are still numerous sites that I have yet to visit, and which I will hopefully get around to eventually, but until then I am reliving, from time to time, some of those places I got to visit during my Danish sojourn. One such place was Norup Church on Fyn. 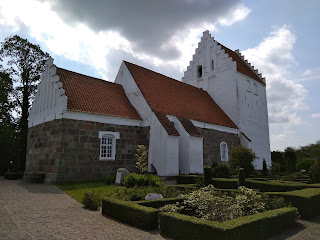 Norup Church is situated a few kilometers to the north of Odense, to whose bishopric Norup belongs. In its current form, the church is a product of late medieval and modern changes to its architecture. One such change is the tower, very typical of Danish parish churches, which was added in the later Middle Ages, but at an uncertain date. The church is not well attested in the medieval source material, and the earliest reference to Norup Church is an indirect reference to the parish, although not the building itself. From later antiquarian sources, the church is called the Church of Our Lady, and this dedication was most likely in place already in the Middle Ages. 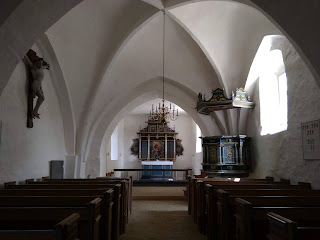 Norup Church in predominantly a rather unassuming church, and I came upon it by coincidence as my parents and I were driving in the area. Due to changes in later centuries, much of its medieval history is less eye-catching than in several other Danish parish churches. However, as I learned afterwards, there are several fragments from the Romanesque stone church which is likely to have been erected in the twelfth century, a period which saw the construction of a several parish churches in Odense diocese. Unfortunately, as the visit to Norup was unplanned, my parents and I missed the scattered vestiges of the Romanesque phase of the church which can be found in the walls of the church, but which I have since learned about. In this way, Norup is emblematic for the minor Danish parish churches, because even though the smallest and least known may house very exciting and valuable treasures that shed some light on our understanding of the Danish medieval past. 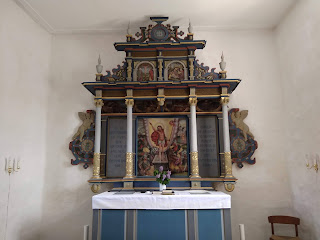 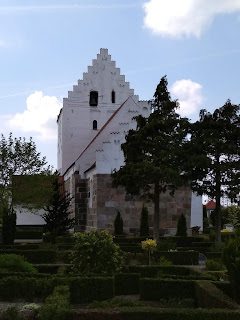