A fragment for the eve of the Resurrection

Today, April 3, is the Easter eve, the day between Christ's death on the cross and His resurrection, and the middle point in the liturgical climax of the Christian year. Due to the importance of Easter in the liturgical celebration of the medieval churches, there survives a great amount of manuscripts containing the texts to be sung or read for that season. I have previously posted examples of such paschal fragments from my work in the special collections at Syddansk Universitetsbibliotek, for instance here. This Easter, I was reminded of the fragment RARA K 284, about which I have previously written here and here, which contains a part of the mass for the Easter vigil. The fragment comes from a missal, and despite its heavily worn lettering, it has been possible to identify the text as belonging to the Book of Jonah, chapter 3, verses 1-6. 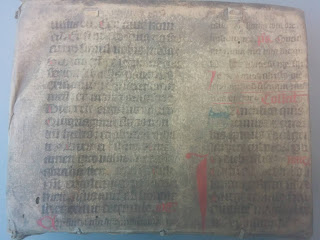 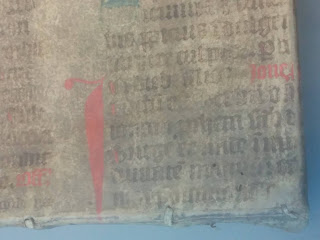 The text from the Book of Jonah points to an important aspect of the use of the Bible both in the Middle Ages and also today, namely the idea that episodes and events in the Old Testament were repeated in the New Testament. This pattern is also known as typology, whereby the anti-type - or the precursor - can be found in the Old Testament, and the type can be found in the New. In the Christian interpretation, therefore, the Book of Jonah contains an anti-type to the story of Christ's resurrection, because Jonah was swallowed by a whale and emerged from it afterwards, just as Christ came back to life. For this reason, the Book of Jonah provided a suitable reading for the liturgy leading up to Resurrection Sunday, and this is what we see in this now-tattered fragment.