As I mentioned in my previous blogpost, I am giving two conference presentations this week. The first of these is tomorrow, where I will be speaking on the third and last day of the Becket conference, the belated 850th anniversary of the martyrdom of Thomas of Canterbury in 1170 (as well as the 800th anniversary of the translation of his relics in 1220).

The presentation is pre-recorded, and to access it you need to register for the conference. If you have not done so, you might still find this blogpost useful, as the purpose of the post is to provide links to some of the sources that I have used in my research. 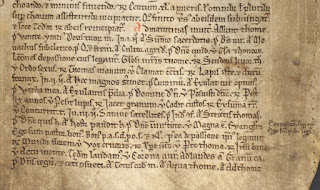 The first source is AM 679 4to, a thirteenth-century Icelandic manuscript which contains a version of the so-called Ordo Nidrosiense, i.e. a book containing the liturgical feasts celebrated in the Norwegian archiepiscopal province, which included Iceland, Greenland, Shetland, the Orkneys, the Faroes, the Hebrides and Man. This source is invaluable for understanding the yearly cycle of liturgical performance in the churches throughout the Norwegian archdiocese.

The second source is Breviarium Nidrosiense, a breviary containing the materials for the office for the feasts celebrated throughout the liturgical year in the Norwegian church province. The breviary was printed in Paris in 1519, commissioned by Archbishop Erik Valkendorf. The content was most likely drawn - at least in part - from a manuscript of the Ordo, or some similar manuscript used at Trondheim, the metropolitan see of Norway. This means that despite the use of new technology, the content was old and therefore a valuable source to liturgical observance in earlier centuries.

A digitised edition of Breviarium Nidrosiense can be found on the website of the Norwegian National Library.

A searchable, transcribed edition of the content of the Breviarium can be found on the website Bokselskap. This version is edited by Ingrid Sperber, and it includes an introduction by Espen Karlsen and Sigurd Hardeide, and it is a phenomenally useful tool for any researcher or enthusiast. The edition was published by the National Library for the 500-year-anniversary of the printing of what are known as the first Norwegian (printed) books, and which was celebrated by a series of events throughout Norway in The Norwegian Year of the Book in 2019.


The third source that I mention, although I do not engage with it, is Missale Nidrosiense, the sister-volume of the Breviarium containing the materials for the mass celebrations in the Norwegian archdiocese.

A digitised edition can be found at the Norwegian National Library.

These sources will be mentioned in the course of my talk, and in the event that my presentation, or just the reading of this blogpost, inspires you to explore these sources, here they are gathered on one single plate. Enjoy.