Today is the feast of Edmund of East Anglia, a king who was killed by Danish raiders in 869, and who shortly afterwards became the subject of a cult. I wrote about Edmund in my PhD thesis (which can be accessed here), and I have written several blogposts about aspects of his cult throughout the medieval period (for instance here, here, and here). My interest in Edmund continues, and I am always on the look-out for evidence of his veneration. This blogpost is about one such piece of evidence from Western Norway.

February this year, my parents and I went for a roadtrip to the coast of Selja municipality, a dangerous area on the sea route from Bergen to Trondheim, known for its often harsh seas and stormy conditions. In the medieval period, Selja was an important node in the traffic between Trondheim - one of the main trade hubs and ecclesiastical centres of the kingdom - and the rest of the world. Of particular importance to the topic of this blogpost was Selja's connection to England. The currents of the North Sea made Selja a natural stopover for pilgrims, merchants and travellers of any other kind, as is suggested by the idea that Olaf Haraldsson, the later Saint Olaf, went ashore here on his return to Norway from England in 1016, at least according to the twelfth-century chronicler Theodoricus Monk. A more concrete testament to the English connection can be found in the Benedictine abbey of Selja, which was founded around 1100 and dedicated to Saint Alban, the protomartyr of England, ruins of which still stand today. Not far from this abbey, in a fjord a little to the north, lies the Church of Saint Edmund, known in Norwegian as Sankt Jetmund-kyrkja, as Jetmund is the Norse variant of Edmund. 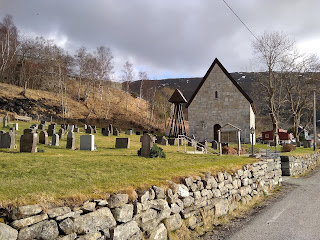 The commonly accepted scholarly interpretation is that the church was built around the middle of the twelfth century, although the exact date is unknown, and that it was connected with the abbey at Selja, possibly as a tithe church established to generate funds to the Benedictine community. The dedication of the church to Saint Edmund supports the connection to the English monks, although the general influence from England on the cult of saints in Norway was significant.

Little is known about the church throughout the medieval period, and to my knowledge it has not left any traces in the surviving written material. The best clue to the medieval church is the building itself, or at least what can be reasonably dated to the medieval period. Unfortunately, as the building was abandoned as a parish church for the village of Åheim in 1863, much of the stone was repurposed. This was a consequence of a law from 1851, which stated that all churches needed to have sufficient room to house 30 percent of the congregation within its walls, and the small medieval structure failed to meet these demands. 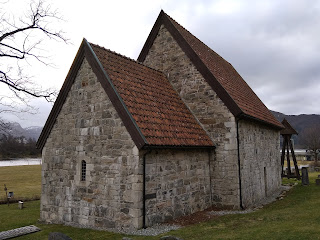 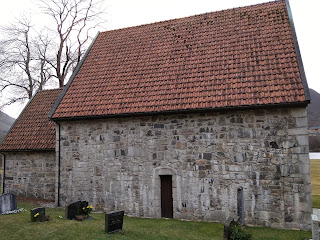 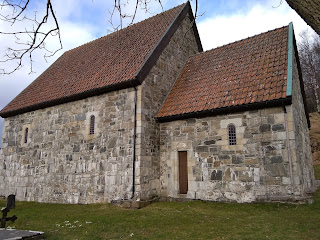 The church was subject to a restoration project that began in the 1930s, discontinued in the course of the 1940s due to the war, and completed in 1957. In many ways, the reconstructed building represents a reasonable hypothesis about the shape of the church, as it follows the design of typical Norwegian twelfth-century church with a square basic structure, pointed roofs, and a free-standing church tower in wood. Some elements, however, appear to have survived the dismantling of the church, such as the decorated capitels of arch separating the choir from the nave. Similarly, a segment of the wall that rises about one metre from the ground appears to have been remained by the time the restoration began, and this original section can be seen below a horizontal line visible on the inside of the wall, separating the older and the newer layer (cf. photograph below). 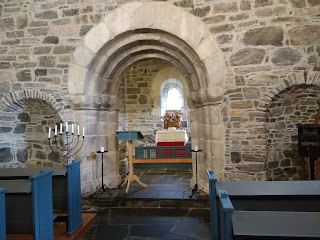 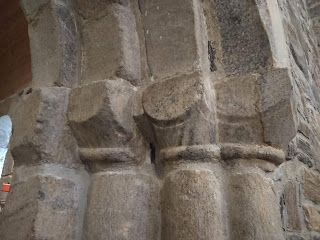 A piece of the original church decorations 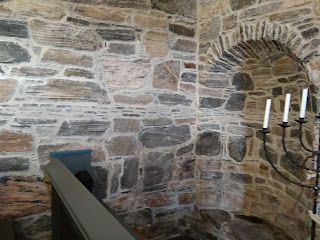 The layer that separates the medieval, undisturbed section and the later restoration 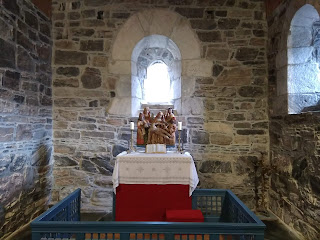 The Church of Saint Edmund as it stands today in its restored fashion is a beautiful piece of architecture, and although we will never know exactly how well it corresponds with the building used in the Middle Ages, we are nonetheless able to get some sense of the importance of the church in the local landscape. Due to the topography in the fjords, which in many places has remained unchanged in its basic elements through millennia, we have a very good sense of how the church must have appeared to travellers coming by boat into the Vanylven Fjord, either from the coast or one of the neighbouring fjords. Lying on the alluvial plain where Åheim River runs into Vanylven Fjord, the church would have been easy to see from afar, and it would have stood out in the deceptively open landscape. And this visibility can still be appreciated and noticed by a modern traveller. 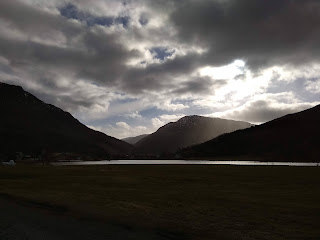 The view from the church, as would have been visible to medieval churchgoers
Lagt inn av Steffen kl. 11:53