Today, January 7, is the feast of Knud Lavard, son of the Danish king Erik Ejegod (r.1095-1103), who was murdered by his cousin Magnus, son of King Niels (r.1104-34). The murder took place at Haraldsted near Ringsted on Sjælland, and Ringsted became the centre of Knud’s cult. While the formal canonisation of Knud only came in 1169, the Benedictines of Ringsted Abbey began preparing the ground for his cult already in the 1130s. Knud is typically known as Knud Dux, in order to distinguish him from his sainted uncle Knud Rex, who was killed in Odense in 1086.

The cult of Knud Dux was strongly promoted by Knud’s son Valdemar (sole king of Denmark 1157-82), apparently in direct competition with the cult of Knud Rex, whose centre was in Odense. Knud Dux became a patron saint of Valdemar’s new dynasty, but due to tumultuous periods of conflict between various pretenders to the Danish throne throughout the thirteenth and early fourteenth century, the cult of the sainted duke appears to have had limited, albeit notable, impact beyond Sjælland. One example of this limited but notable impact can be found in a book printed in Lübeck in 1492, and this blogpost aims to explain both how the inclusion of Knud Dux in this book shows both the significance as well as the limit of his cult in the later Middle Ages.

The book in question is the collection of saints’ lives Das Leuend der Hÿlghen, or Passionael, printed by Steffen Arndes. The first edition of this book appeared in 1488, and a second expanded edition came in 1492. In the second edition, Arndes included a number of Scandinavian saints, including both Knud Rex and Knud Dux. As both these saints were known in the cultural geography in which both Northern Germany and Denmark participated, the inclusion of these saints are not surprising. Moreover, Arndes had several customers in Denmark and Sweden, so the inclusion of these saints can also be seen as a kind of marketing.

Passionael contains a number of beautiful woodcuts depicting the saints of the given chapters. In many cases, the woodcut was specifically made for the saint in question, such as the vignette for Knud Rex, which depicts him as a king and shows him holding a sword, which was his main attribute. At the opening of the chapter of Knud Dux (f.181r), the vignette shows a youngish man with hair to his shoulders and with his palms pressed against each other, ostensibly in prayer. His head resting on a cliff or a rock. Around his neck is a collar that possibly is meant to signify ermine, thereby pointing to his noble or royal background. Above him stands an executioner with a curved sword whose edge is planted firmly in the saint’s head. The vignette does in a way fit with the legend of Knud Dux in that the person in the picture is young and of highborn status. However, the death of Knud was brought about not by an executioner but by a group of his cousin Magnus’ men, not by an executioner who, in saint stories at least, is effectively an official representative of secular power. The legend of Knud Dux as it is narrated in Passionael follows its typical pattern, although its precise source has not yet been established, and therefore there is a distinct dissonance between the legend and the image. The explanation is simply that the image is recycled.

The image of the young man appears again on f.400r, and although it appears later in the book, this chapter appears to have been part of the first edition from 1488. The chapter beginning on f.400r tells the legend of Saint Hulpe, the son of the king of Sicily at the time of a certain Emperor Anthony. Saint Hulpe is likely apocryphal, and the history of his cult is unknown to me at this stage. What is notable, however, is that Hulpe fits the vignette much better than does Knud Dux, and it seems certain that Arndes recycled the image for the Danish saint because of some overlaps between the two: youngish age, royal background, killed by the sword. 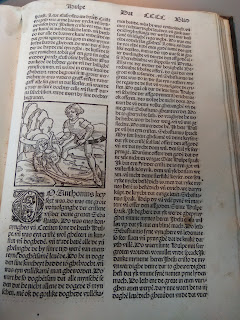 Such recycling of images is not uncommon in printing, so it is not surprising to see it done in Passionael. What is interesting about it, at least to me, is what it tells us about the impact of the cult of Knud Dux at the close of the fifteenth century. On the one hand, he was a figure sufficiently well known throughout the Western Baltic that he was included in a collection of saints’ lives produced in Lübeck. On the other hand, he appears to have not been sufficiently important to warrant the production of a specially made woodcuts, even though such woodcuts were made for most, perhaps even all, of the other saints whose chapters were added in the second edition of Passionael. Granted, we need to be careful about using the recycling of woodcuts and images as measures of popularity. There might have been other elements at play than Knud Dux’ fame or relative lack thereof, but the case nonetheless serves as an interesting reminder of the potential limits of a cult’s popularity, despite its relative broad dissemination beyond its cult centre.
Lagt inn av Steffen kl. 07:46